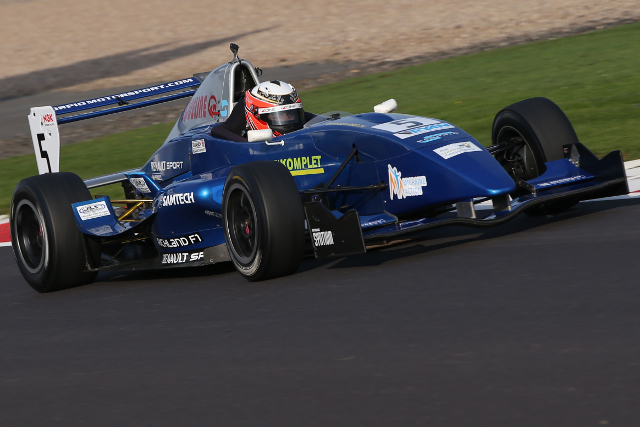 Ivan Taranov and Wei Fung Thong have shared the pole positions for the final rounds of the 2013 Protyre Formula Renault Championship at Silverstone, both drivers taking their first poles of the season.

In typical Formula Renault style, the morning’s opening fifteen minute session wasn’t decided until the final seconds. Weiron Tan, who heads into the weekend having won five of the last six races, headed the times when the chequered flag fell.

A great last ditch lap from Taranov saw him storm into pole position though, the Russian setting a best time of 56.697s to mark his return to the championship on top. Tan meanwhile slipped back to third behind Fortec Motorsport team-mate Sam MacLeod, the top three separated by just 0.070 seconds in the end.

Newly-crowned 2013 champion Chris Middlehurst went fourth quickest ahead of Thong and Jake Cook, the latter being one of the drivers aiming to finish runner-up in the points, while Hongwei Cao was seventh fastest, making it four Fortec cars in the top seven.

The day’s second session also went down to the wire, with Middlehurst leading the way for the majority of the session before being pipped at the flag, with Thong grabbing pole with a 57.055s lap.

Middlehurst was left to settle for second ahead of Tan and Taranov, another incredibly close session seeing the top four separated by just 0.098s.

Matt Rao produced an impressive performance to take fifth, a stark improvement from his twelfth for race one, with MacLeod joining him on row three. The row behind will feature Cook and Cao, with Cevallos and Baptista completing the top ten, the latter just edging out team-mate Hickin.

Ashley Crossey was the quickest of the two championship newcomers over the course of the day, the Core Motorsport ace taking fourteenth and sixteenth place starts, with fellow newbie Alex Gill sixteenth and seventeenth.