After a superb season in 2012, which saw bumper grids peak at 32, a high-quality field and an epic title scrap between eventual victor Scott Malvern and Josh Webster, the pressure was on for the Protyre Formula Renault Championship to repeat those heights in 2013.

A truly international field came together for the latest campaign, with no less than eleven nationalities represented over the course of the season. Emerging victorious though was a young Brit, Chris Middlehurst.

The former Formula Ford 1600 champion headed into the season as the early championship favourite, following an impressive maiden ‘slicks and wings’ campaign in 2012 which yielded two podium finishes.

The 18 year old hit the ground running on the opening weekend at Donington Park with a win and a second place, giving him a championship lead he would go on to never relinquish.

That performance set the tone for a dominant run that followed, with two wins next time out at Snetterton followed by a stunning victory hat-trick at Thruxton – however the MGR Motorsport ace wasn’t to have it all his own way over the course of the campaign.

When the series reached Croft in July, Weiron Tan emerged from the shadows to storm to a clean sweep of the three race wins. The Malaysian had indicated his potential with a pair of podiums at Thruxton, and he followed up his Yorkshire dominance with more of the same at Rockingham.

The Caterham F1-backed racer took two more wins in the first two races, and was set to make it six in a row before a mechanical failure robbed him with five laps remaining.

Tan’s winning streak wasn’t enough to truly challenge Middlehurst in the championship though. Consistent podium finishes behind Tan, thirteen in fourteen races in total by the end of the Rockingham weekend, ensured he wrapped up the title in Corby with one weekend still to go.

That proved to be a blessing in disguise for the champion, as the final meeting in support of the BTCC at Silverstone saw him retire from both races. The second DNF came after contact with Tan, however a podium earlier in the weekend had already confirmed the 18 year old as vice-champion.

The star at Silverstone meanwhile was Ivan Taranov, the Scorpio Motorsport ace ending a tough campaign with a double victory, in the process ensuring it wasn’t a Fortec and MGR clean sweep of all the race wins over the season.

The Russian racer was tipped for a title challenge at the start of the season, however a heavy opening weekend accident was followed by a disqualification from victory at Snetterton and an exclusion for a post-race incident at Thruxton which led to a race ban that extended to Silverstone – the various troubles leaving him twelfth in the points standings.

Alongside Middlehurst, the other driver waving the British flag at the front of the field was Jake Cook, the 2012 Formula Ford GB vice-champion making his ‘slicks and wings’ bow with Hillspeed.

Whilst consistently fast over the course of the campaign, picking up regular podium finishes throughout, Cook wasn’t quite able to snatch a coveted race win. Two frustrating late DNF’s eventually dropped him to fifth in the final points standings.

Just above him in the championship was Hongwei Cao, the Chinese racer becoming a consistent front-runner in his second year in the series. The Fortec ace carded five podium finishes in total, the highlight of his year coming with a maiden category win in the final race at Rockingham.

For the other two race winners, Jorge Cevallos and Sam MacLeod, the season proved to be a case of what might have been.

Cevallos hoped an opening weekend win would launch a title bid, but it proved to be the highlight of a season spent battling in the top six. Consistent finishes though did lead to a top three championship finish.

MacLeod meanwhile was one of the quickest guys on raw pace over the season, but saw his campaign plagued by bad luck, retiring from half of the races. Five podium finishes though, including a victory at Snetterton, meant he battled to a top six championship placing.

Down the pitlane, Jamun Racing, the team that guided Malvern to the title last season, had a much tougher year this time around with Diego Menchaca and Pietro Fittipaldi, who were both juggling the Renaults with BRDC F4 campaigns. 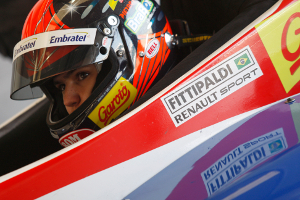 Second year racer Menchaca appeared their best bet for a potential title defence, but that never materialised as a best finish of just sixth, coupled with two missed meetings, left him eighteenth in the standings.

Like Menchaca, Joe Ghanem was another second year driver not quite able to hit the heights he’d initially have hoped.

The Lebanese racer indicated a good season may be ahead of him with some battling performances at the front on the opening weekend, but a solitary podium at Croft aside, it was a frustrating campaign for the Mtech Lite ace who finished seventh in the standings.

At former champions Scorpio, Taranov’s various misdemeanours left Henrique Baptista as the team’s top finisher. The Brazilian showcased his potential with a pair of battling fourth place finishes, but regular mistakes, in particular three consecutive DNF’s to close the season, dropped him to ninth in the standings in the end.

Overall, while the single-seater series wasn’t quite able to reach the heights of last year, with grid sizes peaking at 20 over this campaign, this season’s running of the BARC championship was just as intriguing.

With action-packed races producing wheel-to-wheel racing, and rising single-seater talents from across the world joining the series to take on the best the UK has to offer, the championship remains in a strong position in the ever-developing UK single-seater market heading into 2014 and beyond.