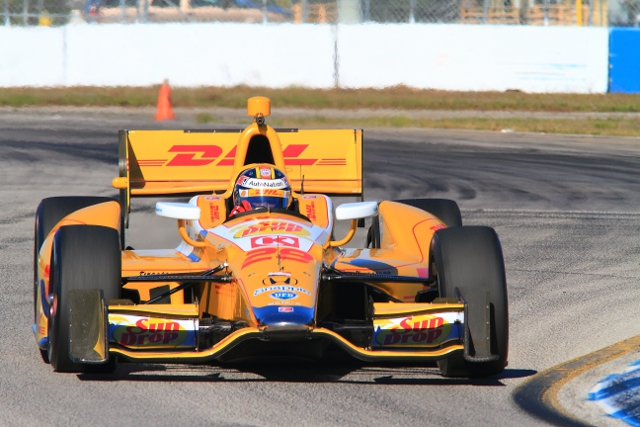 IndyCar teams up and down the paddock have gained valuable data in the run up to christmas following the first day of a two day test at Sebring.

Sarah Fisher Hartman’s Josef Newgarden said: “I think there’s a chance to get a little out of rhythm if you’re off the track for too long. Even for me as a driver, it’s great to be back behind the wheel for a couple of days. It keeps you fresh and keeps your brain thinking over the holidays.”

Many of the Honda powered teams used the test as an excuse to learn more about their new twin-turbo V6 with the potential differences it provides over the 2013 single turbo.

Indeed one team testing a Honda for the very first time was Andretti Autosport, at the hands of James Hinchcliffe the teams DW12 adjusted to the lack of Chevy grunt: “To get to run in the car is great and especially to get a first taste of the Honda power. It’s an exciting new chapter for us, getting to work with the Honda Performance Development guys and building some new relationships and learning as much as we can about this new engine.”

Hinchcliffe continued: “It’s surprising how different they are. It’s really cool to see how the two manufacturers approach things and solutions to certain problems that everyone is going to have. It was a cool experience. For a driver, being part of development is a lot of fun. Having spent two years with Chevy, we have some insight that we can bring to the table and we’re obviously learning a lot from the Honda guys as well.”

One man who will be aiming to make a good impression in first IndyCar preseason is former Renault 3.5 champion Mikhail Aleshin, the 26-year-old will become the first Russian to compete in IndyCar when he makes his debut for Schmidt Peterson Motorsports in partnership with SMP Racing.

Aleshin was testing the #55 alongside team mate Simon Pagenaud who was behind the wheel of his own #77: “You get a month break between tests, so it’s good to get back in the race car. It’s very important through the winter season to be able to use the test days to experience things we wouldn’t do during the race weekend.

“There are a lot of items, a lot of experimental things we want to try and hopefully understand what direction they could take us and apply it to the race car in the future.”