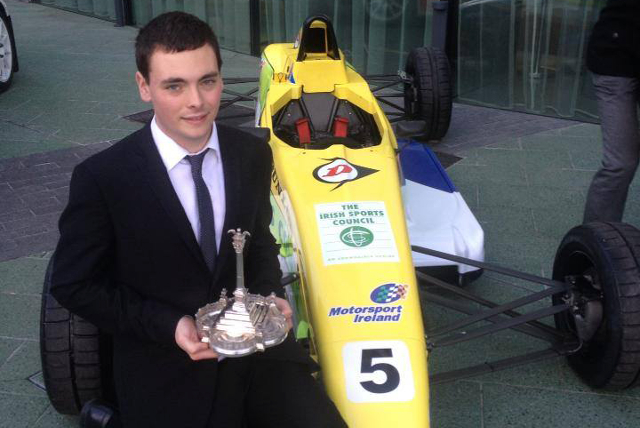 2013 Formula Ford Festival winner Niall Murray has been selected as the 2013 Dunlop Motorsport Ireland Young Racing Driver of the Year.

The annual award carries a prize of a fully funded season of racing in Formula Ford, confirming Murray’s return to the single-seater formula next season, along with the prestigious Sexton Trophy.

Niall’s success means the Murray family has become the first to see two brothers win the trophy, with Niall following in the footsteps of his brother, former BTCC racer Eoin.

The award comes after a superb maiden single-seater campaign for the former Ginetta Junior race-winner, with the Festival win coming after a race-winning campaign in the Irish Formula Ford 1600 championship.

“I’m absolutely over the moon to have won this award,” said Murray. “I’ve been shortlisted in the past but this year I felt I had the very best chance of winning it, but the other two nominees were also very strong so it could have gone to any of us.

“This award is very special to me as it’s been won by my brother Eoin twice before so it’s great to emulate him and add my name to it also. There are so many people who have helped me get to this point, so I would just like to say an overall thank you to everyone who has helped me in my career so far. I’m really looking forward to racing this superb looking car in 2014!”