Brabham Aiming For Another ‘Road To Indy’ Title 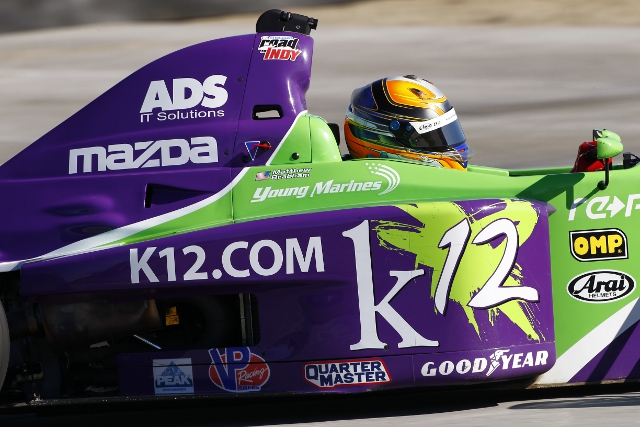 US F2000 and Star Mazda champion Matthew Brabham is aiming for another title on the ‘Road to Indy’ ladder as he starts his Indy Lights push in only a few months time.

“It’s definitely a step up compared to Pro Mazda,” said Brabham, who turns 20 on February 25th “So far it’s been challenging to get used to more power and more grip, but fun to drive. I’m slowly getting there, and it should be a good year for us.”

Ten drivers took part in the test, with Brabham’s team mate Zach Veach topping the combined time sheet with Brabham in third. Interestingly the best times of the top eight drivers were all within one second of each other.

Now on the third rung of the ‘Road to Indy’ ladder, Brabham will hit the same experience level as the seasoned campaigners and even the team’s crew as the entire Lights championship is switching from Firestone tyres to Cooper Tires with Brabham confessing of the challenge ahead: “That’s a big challenge for us. We have to re-do all the setups and rethink our theories a bit.”

Indeed the Florida born driver will be feeling confident coming into 2014 after the season he has just had for Andretti in Star Mazda. The driver had 13 victories – seven in a row, 15 podiums, 10 poles and 13 fastest race laps as well as the incredible statistic that he led 81% of all laps in the season.

Brabham, son of Indy 500 competitor Geoff Brabham and nephew of sportscar ace David raved about the ladder system and the opportunities it gave him: “The scholarship money from Mazda has been a big help and really propelled my career. It’s not only the scholarship money, but the Mazda Road to Indy is really big on developing drivers and not just taking their money. They put on a lot of functions from how to represent yourself, how to talk to the media and things that really help the series as a whole.

“I think it’s really drawing a lot of attention from the States and Europe, and I think it’s going to build more and more momentum.”