Ducati “With Work To Do” But Crutchlow Excited By Challenge 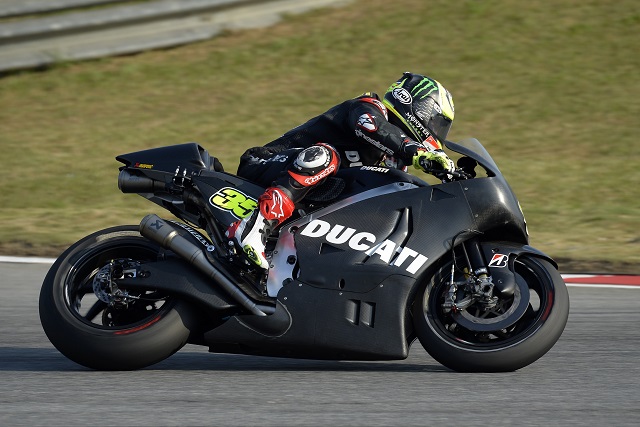 Cal Crutchlow admits Ducati have a challenging time ahead of them as they look to climb back up the MotoGP ladder in 2014. The Briton was fourteenth on the opening test day of the year at Sepang although he felt a slight improvement through the corners, he didn’t see the GP14 as a significant shift from its predecessor. Despite that, Crutchlow is excited and motivated by the work his team are putting in in an attempt to move forward.

“First and foremost, it was good to be able to get back onto a bike after two and a half months off. We rode the GP13 in the morning and the GP14 in the afternoon, and it’s clear we have some work to do because the bikes are not too dissimilar at all. Most of the changes are cosmetic, but the feeling of the bikes is similar. The GP14 enters the corner a bit better, which is what we were looking for. We only used two sets of tyres all day so now it’s about building confidence to go faster with this bike. We also had a lot of electronics stuff to try so I never did too many runs in the afternoon. Ducati are definitely working hard and I’m excited about that.”

Teammate Andrea Dovizioso was twelfth quickest and like Crutchlow, experimented with both the GP13 and GP14. The Italian didn’t feel he completed enough mileage to draw any firm conclusions but expects to learn more on Wednesday.

“Today was a bit of a strange day, the first day of testing in Malaysia should not be taken with too much importance because you have to find the right feeling again after months of inactivity. We had a different bike to test, but we were not able to do a lot of laps and test everything we had scheduled. Luckily we’ve got another couple of days here in Malaysia so it won’t be too much of a problem. It was the right decision to start with the 2013 bike to resume where we left off last season, then we immediately switched to the new bike to see the difference, but unfortunately I only managed 27 laps today. I feel sure that things will go a lot better tomorrow.”

By Justin Nguyen
4 Mins read
NBC plans to end NBCSN before the end of 2021. Motorsports like NASCAR, IndyCar, IMSA, and MotoGP, which have races on the network, will have to look for alternatives in the NBC family like USA Network.
MotoGP