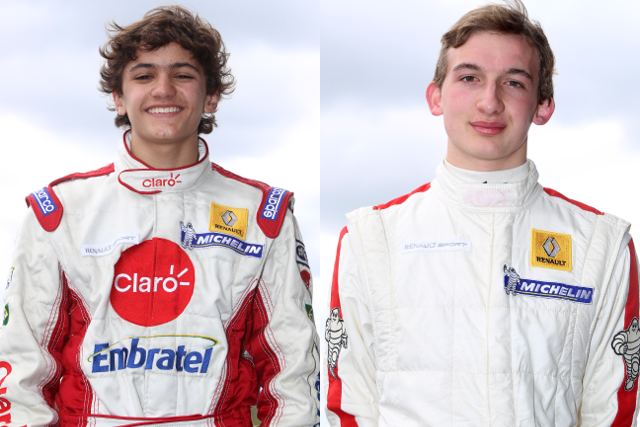 Fittipaldi, grandson of double F1 world champion Emerson, will lead the team with a title challenge in his sophomore season. The 17 year old enjoyed a strong maiden campaign in Formula Renault last season, finishing eighth in the championship with a best finish of fifth.

This was combined with a race-winning campaign in the BRDC Formula 4 Championship, though this season Fittipaldi’s efforts will be focused solely on Formula Renault, with plans for a European testing schedule alongside his racing.

Hoping to join Fittipaldi in challenging at the front of the field will be Ferrer. The 18 year old had a mixed first season, but some strong late results, including a best of fourth at Rockingham, meant he ended the year little more than thirty points shy of the overall top six.

The Italian got further experience in the end-of-season BRDC Formula 4 Winter Series, taking a podium finish on his debut run in the category, and is also currently running in the New Zealand-based Toyota Racing Series.

Noble Jnr joins the series off the back of a dominant run to the inaugural Radical SR1 Cup title last season, with seven wins in eight races sealing him the title by over fifty points. He’ll be running in the FR 2.0 chassis taken to the title by MGR’s Chris Middlehurst last season.

Indian racer Reddy meanwhile is a former member of the Sahara Force India F1 Team academy, and heads to the UK with experience competing in the MRF 1600 series, in which he became the youngest ever race-winner in the category in only his third outing.

“I don’t think anyone quite appreciated how big a learning curve Pietro had last year,” said MGR team principal Mark Godwin. “We saw some real flashes of talent from him and we’re delighted he’s become part of the team for Protyre Formula Renault this year. He has all the right attributes to go a very long way in this sport, he has the ability and has a very good chance of winning races this year.

“Matteo improved massively as the season went on last year, he’ll definitely be a front-runner. He’s been up against some tough drivers out there but he’s shown good pace, just like he did in the Winter Series in F4 last November – getting a podium there was a big boost.”

“Tarun has shown well in the testing he’s done with us, it looks like he could be one to watch and he’s got Rupert [Svendsen-Cook] behind him looking after his career. Rupert knows the Renault is the best car for Tarun to learn in and this is where he needs to be.

“We haven’t done any testing with Colin yet, but he’s got a championship-winning package under him and he did a fantastic job in the Radicals last year. I’m sure he’ll be very competitive from the off and we’ll have four strong drivers. The aim is to try and emulate what we did last season!”