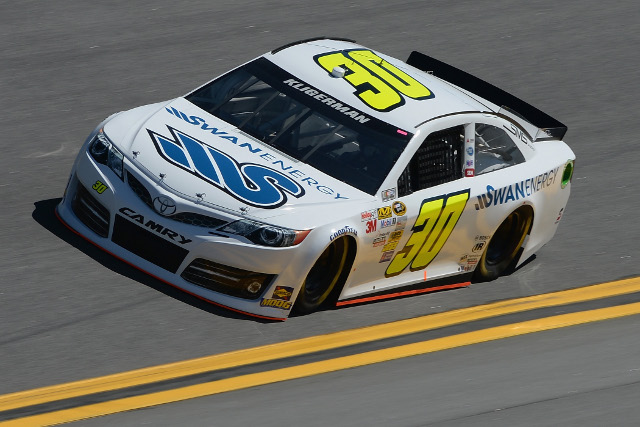 A multi-car accident brought the first NASCAR Sprint Cup Series practice session after qualifying for the Daytona 500 to an early end.

Just as in Saturday night’s Sprint Unlimited the accident was triggered by Joey Logano and Matt Kenseth, Logano appearing to bump draft Kenseth into the Daytona International Speedway tri-oval before ultimately hooking the #20 Toyota to the left into Paul Menard‘s #27.

“We were coming off four there and the 20 started making a move to go down,” said Logano. “I assumed he was gonna go down there.  I had the run, so I was gonna fill that hole and then he started to come back up and I was there.  Maybe I shouldn’t have been racing as hard as I was there in practice, but everybody was in a big pack there trying to make things happen.”

Menard was turned toward the outside wall where we collected Parker Kligerman, Ryan Truex and Dave Blaney. Sprint Cup rookie Kligerman, racing for Swan Racing got the worst of the accident, surfing around the wall on the nose of Truex’s car having briefly gotten into the catch fencing before scraping to a stop on his roof at the exit of the pitlane.

“It’s the first time I ever flipped over,” admitted Kligerman. “I’ve never done that before in a race car.  I assumed that it would be rougher, but it was actually really soft.  I saw the whole thing go down.  I’m up in the fence kind of floating along and thankfully none of the fans got injured, I hope.  That’s obviously a scary situation when a car gets that close to the fence.”

Earlier in the session Brian Vickers had also been involved in an accident being spun into the turn four wall having avoided Cole Whitt‘s slowing car.

In the 30 minutes of running the preceded the accident A.J. Allmendinger, driving the #47 for JTG Daugherty Racing, was fastest ahead of Vickers and Logano – both of whom will be racing in back-up cars for Thursday night’s Budweiser Duels – the races that set the starting order for the Daytona 500.