Fenati Laps At Record Pace To Top FP1 In Qatar 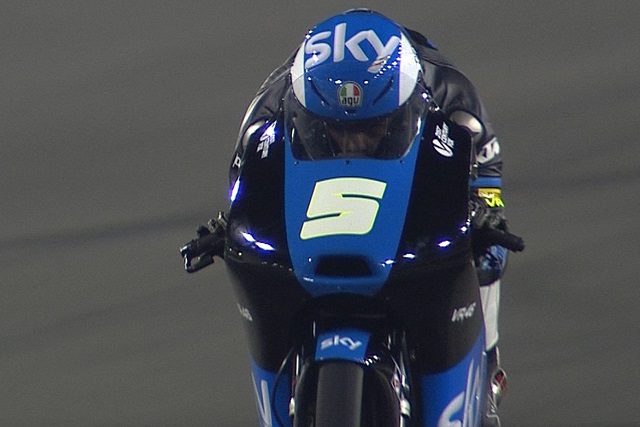 Romano Fenati set the fastest ever Moto3 lap of Losail to top the opening free practice session of the season in Qatar. The Italian gave Valentino Rossi’s Sky Racing Team by VR46 the ideal start on their Grand Prix debut with a 2:07.176 to outpace the Calvo KTMs of Jakub Kornfeil and Isaac Vinales.

Historically, the riders have found life tough on the opening evening of track action in Qatar with sand and dust usually leaving very little grip on the circuit. However, attempts beforehand to clean the track paid dividends as Fenati set a 2:09.674 on his very first lap of the night. Pre-season fears that Honda would be uncompetitive were also calmed straight away as Efren Vazquez clocked a 2:08.160 for Racing Team Germany but KTM soon struck back as Kornfeil broke into the 2:07s.

Two of the three Calvo KTMs ran in close formation as Kornfeil and Isaac Vinales, cousin of reigning champion Maverick, circulated together and both used it to their advantage as they whittled away at their fastest lap time. Last year’s champion team would be denied a 1-2 though by Fenati’s blistering effort six minutes from time although Kornfeil kept him honest with a 2:07.222.

Alex Marquez set a 2:07.775 in the dying seconds to go fourth, pipping Vazquez to the position of leading Honda, while championship favourites Jack Miller, Alex Rins and Danny Kent made a quiet start to their campaigns with sixth, seventh and eighth respectively. John McPhee’s evening was also rather uneventful although that wasn’t the intention as a clutch problem kept him in the pits from much of the session.