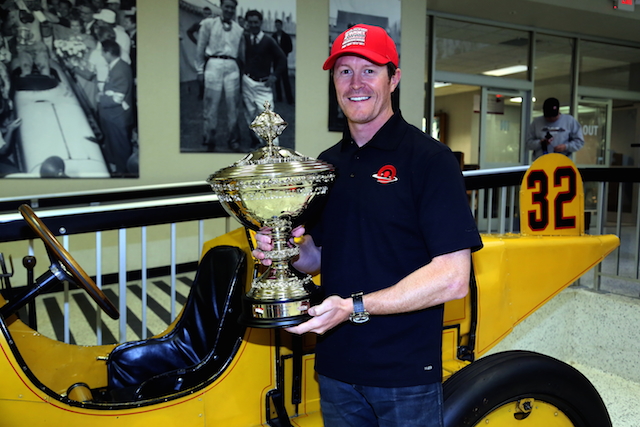 After what seems like an eternity since the last round of 2013 at Auto Club Speedway, the newly named Verizon IndyCar Series kicks off again at St Petersburg with a whole host of changes.

www.TheCheckeredFlag.co.uk casts its eye over the Florida street race to provide this preview of the coming season.

The biggest departure this off-season has to be that of flying Scotsman Dario Franchitti. Cofirming his retirement not long after his horror crash at Houston, this will be the first season opener in five years where Chip Ganassi’s favourite Brit won’t be present on the grid.

Also leaving – this time for pastures new – is Simona De Silvestro. Having a better 2013 after being lumbered with a

Lotus engine in 2012, De Silvestro has left IndyCar entirely for a testing seat at Sauber F1.

Although, with the faces leaving comes a number of new and returning names – the biggest of whom is former CART and F1 star Juan Pablo Montoya.

Driving in North American single seaters for the first time since the CART championship in 2000, Montoya will drive for Team Penske-Chevrolet alongside Helio Castroneves and Will Power.

One less talked about newcomer is that of IndyCar’s first Russian driver Mikhail Aleshin, who has replaced Tristan Vautier at the Schmidt Peterson team. Run in conjunction with SMP Racing, Aleshin will be in contention for Rookie of the Year honours alongside a quick Brit who has made his way up the Mazda Road to Indy Ladder.

That Brit is Yorkshireman Jack Hawksworth who has moved up from Indy Lights to join Bryan Herta Autosport in what is just his third year in the US and his third championship in as many years. A championship crown in Star Mazda and a fourth place in Indy Lights have teed up Hawksworth for an IndyCar charge.

Old Pros not giving up lightly.

The street’s of St Pete can be punishing for drivers old and new, and one man who knows that more than most is Sheffield’s Justin Wilson who has thankfully recovered from his massive crash at Fontana.

“I’m feeling pretty good,” said Wilson who worked hard over the off season to rehabilitate back to prime condition. “I am back in one piece. I healed fast and got back to walking and cycling and training and doing everything that I was

normally doing. I am pretty lucky to get back so quick. It’s been a long off season but I’ve just been training and getting ready for this year and focusing on how to get better and how to get faster.”

However, one driver who seems destined to push himself up the record books is the defending champion Scott Dixon. The Kiwi has taken 33 wins over his career and has his eyes set on the dynasties above him in the shape of Mario and Michael Andretti, Al, Bobby and Al Jr. Unser as well as current team owner A.J Foyt.

Although, the signs don’t look good for Dixon – he hasn’t won at the airport track since it became part of the IndyCar series in 2005, the driver with most wins at the track since that time is Castroneves.

Four time champion Sebastien Bourdais will also be hoping for a strong race on his debut for KVSH Racing after a good off-season of testing: “The team and I came to an agreement early and I think that has paid off in terms of getting a full off-season of testing. I think overall, things went well, but you never really know until you get to a race. At this point, based on our testing, I’m confident we will be competitive and I am looking forward to getting started.”

Also of note during the race weekend is the continuation of the family lines that flow strongly through the series. This time however, it is off track that the younger generation will shine.

That person is Anna De Ferran, the daughter of Indy 500 winner Gil De Ferran. Anna will be performing in potentially one of her biggest gigs as she sings ‘God Bless America’ in the build up to the race.

Father Gil was full of praise for his 19-year-old daughter: “She has been working on her repertoire and performing in small venues back in the UK and over here near our home in Fort Lauderdale, but this will be a tremendous opportunity for her to perform in front of a much larger audience.  Although it will be very daunting for her it will also be a familiar setting with lots of familiar faces. She has been brought up in and around the motorsport community and attended her first race as a tiny baby in 1995.”

First of all it is important to say that heading in to St Pete, the team list hasn’t changed much apart from one exception – Dragon Racing have pulled out of the series in order to focus on their Formula E campaign starting later this year.

Apart from that the biggest change can be seen on the engine front, with two suppliers to choose from teams have chosen to decamp from Honda to Chevrolet and vice versa.

The whole shebang boils down to two teams – Target Chip Ganassi Racing and Andretti Autosport – the two have essentially swapped suppliers, Ganassi have gone from Honda to Chevrolet and Andretti have picked up Honda’s twin turbo engine having ditched Chevy.