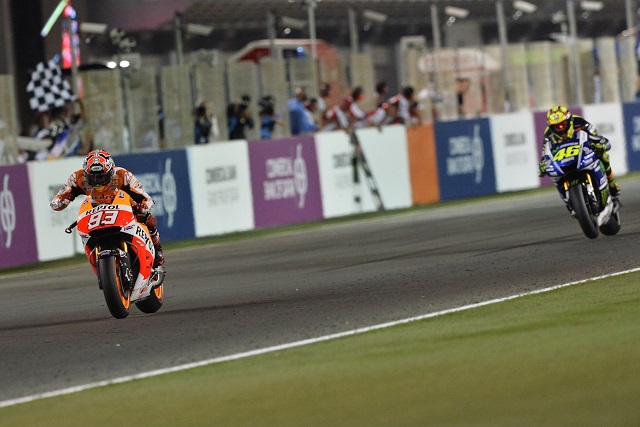 Marc Marquez made the perfect start to his MotoGP title defence with victory in the Grand Prix of Qatar after a titanic tussle with Valentino Rossi. The pair put on a thrilling spectacle under the lights at Losail with the youngster seeing off his legendary rival by just a quarter of a second.

Not known for his electric getaways, Marquez was left trailing on the start line by Bradley Smith who rocketed into the lead but Jorge Lorenzo had got an even better slingshot from the second row and outbraked the Briton into turn one. The Spaniard won so many of his races in 2013 by getting out front and building up a lead but he wouldn’t pull off the same trick this time as the front end of his Movistar Yamaha gave way at turn fifteen, ending his race inside a lap.

Stefan Bradl took advantage of the drama to grab the lead from Marquez, Smith, Alvaro Bautista and Rossi with Dani Pedrosa tagging onto the frontrunners, making up a six-man leading group. Six would become five on lap nine as bike no.6 crashed out in similar circumstances to Lorenzo earlier, eliminating Bradl, but the lead wouldn’t switch over to Marquez but to Rossi who had fought his way past Smith and the defending champion in quick succession.

Pedrosa was also making progress, rising to third, but the front two were marginally quicker and battle was joined on lap fourteen, Marc using the slipstream to breeze past Valentino’s Yamaha. Bautista also used the two to retake third but any hopes the Gresini rider had of a podium would evaporate on the penultimate lap with a crash at turn two. Sadly for British fans, that wouldn’t promote Smith after the Tech 3 rider had tumbled into the same gravel trap two laps earlier, ending a fine ride.

With Pedrosa too far back, the stage was left to the champions of past and present and Valentino Rossi showed his hand a lap and a half from home with lunge into turn four. Marquez didn’t wait long to respond and barged back past at turn six but Rossi pushed him to the limit again at turn ten, forcing a fast reaction from Marquez in order to keep the Honda ahead.

Crucially, Marc managed to keep Valentino out of reach approaching the start/finish straight and prevent a slipstream to the finish line, securing a sensational victory. Rossi may have had to settle for second but even in defeat, he had announced his resurgence as a legitimate contender for MotoGP wins again.

Pedrosa took third with Aleix Espargaro benefitting from the falls ahead to take fourth ahead of Andrea Dovizioso. Cal Crutchlow’s Ducati barely crawled over the finish line having encountered a problem in the closing metres but he just about hung on to sixth ahead of the production Hondas of Scott Redding and Nicky Hayden, the British rookie producing a stellar ride to beat the 2006 champion in a straight fight. Colin Edwards was seven seconds further back in ninth while Andrea Iannone recovered from a fall on lap two to complete the top ten.