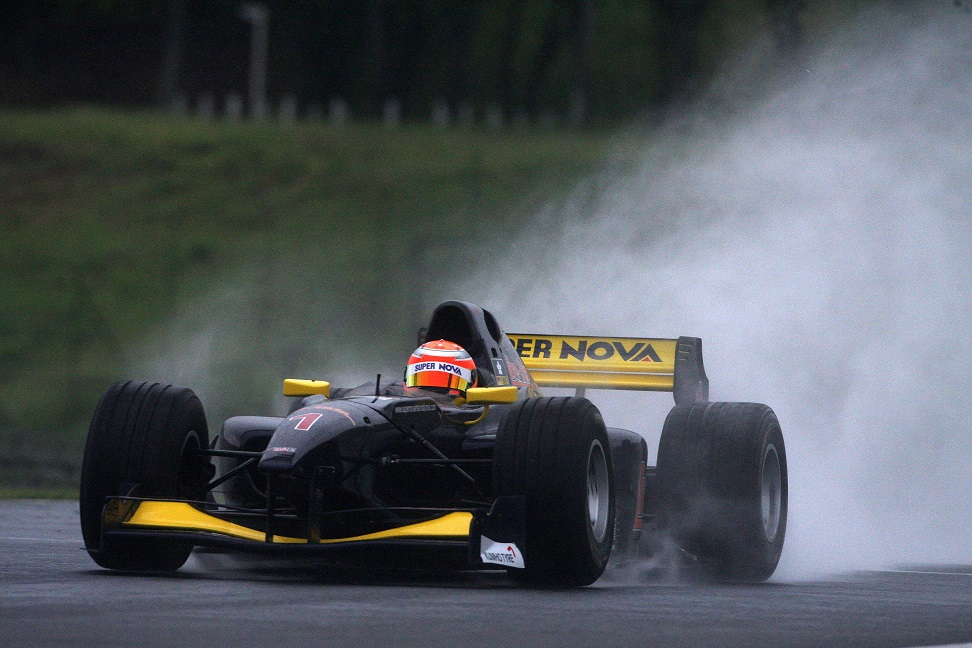 German driver Markus Pommer took his maiden Auto GP World Series pole position in Hungary as a torrential downpour interrupted the second session at the Hungaroring, suspending it for 45 minutes. The Super Nova International driver had already done enough for P1 before the heavens opened.

Home-hero Tamas Pal Kiss, who gets a rapturous reception every time he goes past his Hungarian fans, will join Pommer on the front row of the grid in the leading Zele Racing machine, finishing 0.474s shy of Pommer’s 1:51.949s lap. Belgian Sam Dejonghe put his troubles during practice, where he only completed four laps in the two sessions, to qualify an impressive third in his Virtuosi UK entry.

Fourth on the grid will be Michela Cerruti, the Italian woman driver out-qualifying Super Nova team-mate and 2013 Auto GP champion Vittorio Ghirelli who will start fifth. Andrea Roda was sixth in the second Virtuosi UK entry, while Loris Spinelli qualified seventh, and was the only driver to improve his lap time and position once the session restarted after the downpour. It was also the first time the young Italian has out-qualified his vastly more experienced Eurotech Engineering team-mate Kevin Giovesi who will start tenth.

Michele La Rosa will start race one tomorrow from eighth on the grid in the MLR71 by Euronova entry, one place ahead of Kimiya Sato in the sister Euronova Racing team, the current championship leader struggling in the wet conditions.

Giuseppe Cipriani in the Ibiza Racing Team machine and Zele Racing’s Yoshitaka Kuroda will start P11 and P12 after being eliminated in the opening, dry qualifying session.

Race one will take place tomorrow and is scheduled to run for 23 laps.

By Paul Hensby
1 Mins read
Dwindling entry levels has forced the 2015 Auto GP season to be put on hold, with this weekend’s round at Paul Ricard cancelled.
Auto GP

By Paul Hensby
1 Mins read
Antonio Pizzonia jumped Facu Regalia at the start and was untouchable throughout to take his second Auto GP win of 2015 at Silverstone.