Arthur Pic: “The Victory arrived at the right moment” 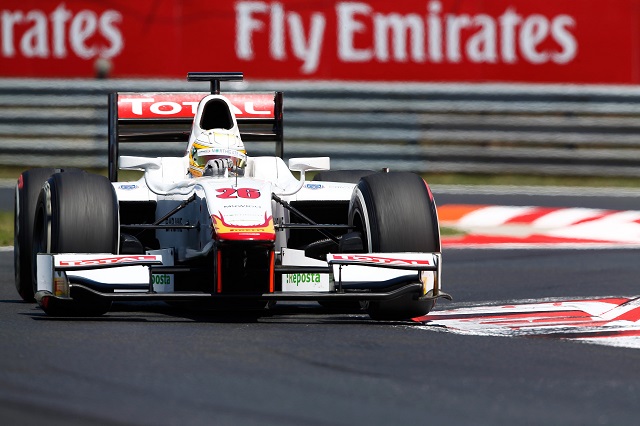 Arthur Pic continues to be one of the most consistent and quickest drivers on the GP2 Series grid in 2014, and the Campos Racing driver has just added a victory to his many points finishes. He is the second best rookie driver in the field, after Belgian Stoffel Vandoorne, and the Frenchman has high hopes for the final part of the year.

Reflecting on the first half of his rookie GP2 season, Pic feels pleased with how he has got on, as the young Frenchman sits seventh in the championship standings with seventy points. He took his maiden series win last time out at the Hungaroring in the feature race.

“I’m very happy about my season so far,” said Pic to The Checkered Flag. “The first part of the season was interesting. As expected the level of competition has been very high because there are a lot of experienced drivers. But we’ve shown that we can compete with them by consistently finishing inside the top eight. I’m very proud of this, as it was my stated goal at the beginning of the season.

“Together with Campos we’ve made a lot of progress during the first half of he year, which culminated in winning Hungary’s Feature Race. Now we need to continue on this path and bring home more podiums. I still have four race weekends to go and need to continue like this.”

Looking back at his weekend in Hungary, he was amazed that he took the win, and it did not sink in straight away that he was victorious but admitted his delight that he could bring his new team a victory in their first season back in the series.

“It’s always a special moment,” insists Pic. “I didn’t realise straight away but I was really happy for the team and myself. We worked very hard during the winter and to score a win just before the summer break was perfect timing, really.”

The win followed two race weekends where things did not go to plan for the Frenchman, and he left both Silverstone and Hockenheim having failed to score a point. It was particular distressing in Germany where a potential podium finish or even a win was taken away from him by a problem in his pit stop that cost him almost a minute. The engine stalled because of the extreme heat, and by the time his mechanics had got it going again, he was well down the field and out of contention.

“I think at Silverstone we didn’t have the pace to finish on the podium,” reflected Pic. “But I was very frustrated at Hockenheim because we had a podium finish in our hands during the Feature Race before the engine problem at the pit stop. I was very disappointed because until that moment the weekend was perfect.

“P6 was my best qualifying result up to that point, I made a good start, was P5 and first of the drivers who’d begun on the soft tyres. When I saw that Mitch Evans won using the same strategy as us, but started from P15, I knew that a podium or victory was definitely possible. So yes, it was hard for the entire team and me. But it also proved that we had the pace to fight for the win.

“The victory arrived at the right moment.”

The Frenchman hopes to continue his good form for the remainder of the season, and is looking to secure more podium finishes in that time. He knows he will have to continue having strong qualifying sessions to maximise his race results, but after qualifying sixth and third in the past two races, he is positive about moving forward.

“I think we need to continue to qualify in the top six-to-eight places,” said Pic. “After what we’ve seen in the first half of the season, everything is then possible in the races. My goal for the rest of the season is still the same: finish all Feature Races in the top eight and hopefully score a couple more podiums. That would be great.”

Pic continues to feel happy within the Campos Racing team, and admits he has a good working relationship with team-mate Kimiya Sato, and feels the two of them working together will only benefit the team in the long run.

“The atmosphere is good, especially as most of the team worked with Addax last year,” said Pic. “I also have a good relationship with Kimiya. We are both open, which helps the team to move forward. The best example of this was us qualifying third and fourth in Hungary.”