Fittipaldi in Seventh Heaven at Snetterton 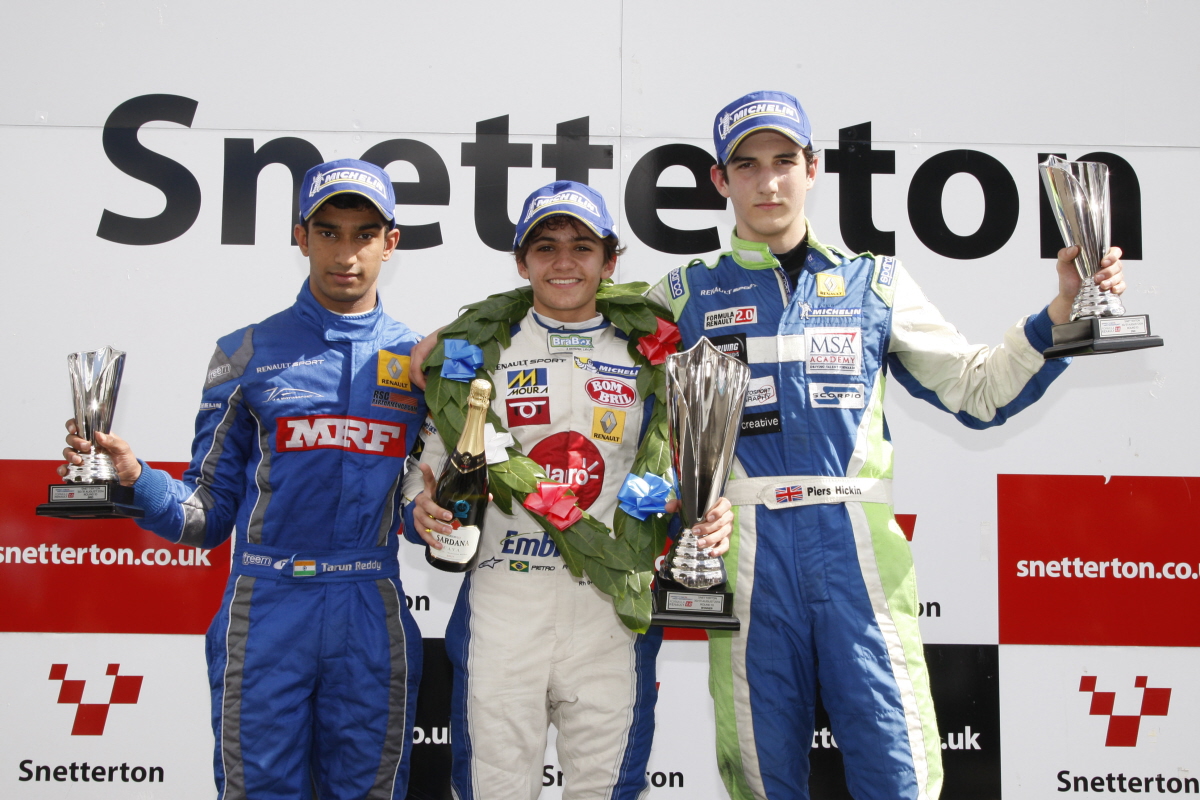 MGR Motorsport’s Brazilian sensation Pietro Fittipaldi has continued his dominant form in the Protyre Formula Renault Championship with a seventh consecutive victory in the second race of the weekend at Snetterton. The Miami born racer took the lead from the off, heading Scorpio Motorsport’s Piers Hickin for the twelve lap encounter.

Pole was secured by Fortec Motorsport’s Alex Gill but the 16 year old stalled his Tatuus FR2000 on the grid and fell to the back of the field before he could get going. That left Fittipaldi un-opposed into Riches, after which he didn’t need to look back. As he crossed the line at the end of the first lap Fittipaldi was 1.3 seconds clear. He built his margin up to seven seconds at the end of the race.

Hickin was similarly un-hassled during the race, holding a ten second advantage over Fittipaldi’s team mate Tarun Reddy. The Scorpio Motorsport driver said, “I’m relatively happy with second, obviously Pietro was pretty quick but I did think we had got the pace to catch him. I made a mistake later in the race, though, so that sealed the deal for Pietro but congratulations to him. I’m pleased to get more solid points for the team as the guys at Scorpio deserve it.”

Tarun Reddy didn’t actually do as badly as the numbers suggest. While the gap on the timesheets was 10.387 seconds, he only actually lost a little over five seconds to Hickin. The other five seconds came as a result of a penalty for exceeding track limits, no doubt at the start of the Bentley straight on the Snetterton 300 layout, a fate which also afflicted the #23 machine of Patrick Dassault.

The French Canadian similarly untroubled by the penalty though. He crossed the line over three seconds behind Colin Noble Jr and well over nine seconds clear of MTech Lite’s Hayden Edmunds so he didn’t lose out when the seconds were added on.

Alex Gill took fourth place after a sterling recovery drive. The sole Fortec entry came to the end of the race locked in a four way duel for the spot but bested the Cliff Dempsey Racing entry of TJ Fischer by over half a second. Both Gill and Fischer were set for higher finishing spots but a squabble for position allowed Reddy to sneak back into the final podium spot despite his five second handicap.

Matteo Ferrer for MGR took sixth ahead of his team mate Noble and the penalised Dempsey machine of Dassault.

Not only did Fittipaldi claim the race win but for the second race in a row he also netted the fastest lap. That gave him two additional points to add to his advantage over Matteo Ferrer, his now distant championship rival.