Marquez Marches On With Indianapolis Pole 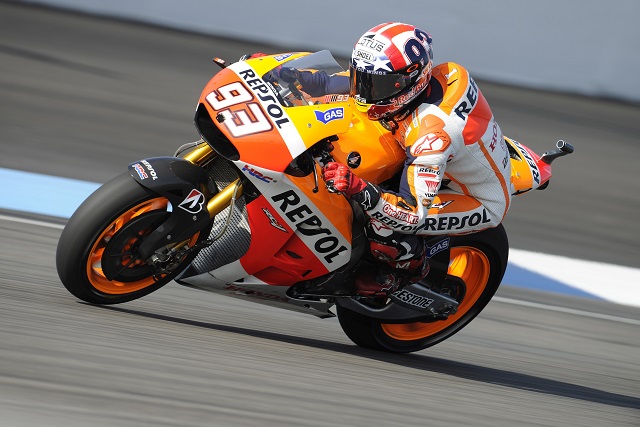 Marc Marquez put himself in perfect position to challenge for a tenth straight victory by claiming pole for the Indianapolis Grand Prix. The reigning champion delivered on his Friday practice promise, taking pole by a quarter of a second, with Andrea Dovizioso producing another heroic display on board the factory Ducati to take second ahead of Yamaha’s Jorge Lorenzo.

Qualifying started with encouraging news for British supporters as Scott Redding and Cal Crutchlow locked out the top two spots in Q1, booking their place in the pole position shootout. Redding’s sensational performance added insult to injury for his Gresini teammate Alvaro Bautista who had suffered an enormous highside in final practice, the Spaniard finishing Q1 in fourth behind Yonny Hernandez. Leon Camier was as impressive as anyone with the Aspar debutant securing sixteenth place on tomorrow’s grid, ahead of an illustrious list of riders which includes his experienced teammate Hiroshi Aoyama.

Marquez headed into Q2 as strong favourite for pole position but his first run was something of an anti-climax as the Spaniard slid down the escape road at turn one, leaving him looking for a way back on circuit from the Indianapolis oval. Marc recovered and promptly set a 1:31.718 on his next flying lap, launching him straight to the top of the timesheets, three tenths quicker than Jorge Lorenzo.

The world champion wasn’t finished there and found another tenth of a second set of tyres and although the chances of anyone beating him were slim, they vanished completely when Bradley Smith crashed out at turn two in the final minute, bringing out the yellow flags.

Andrea Dovizioso had snatched second from Lorenzo just in time to secure a place on the middle of the front row for Ducati with Jorge’s second run falling short by 0.025s. Aleix Espargaro will start an excellent fourth ahead of Valentino Rossi and his brother Pol while Andrea Iannone marked his birthday with seventh place. Dani Pedrosa’s anonymous weekend continued with the Spaniard unable to do better than eighth while a battered and bruised Bradley Smith will line up alongside in ninth, just ahead of Stefan Bradl, Scott Redding and Cal Crutchlow.