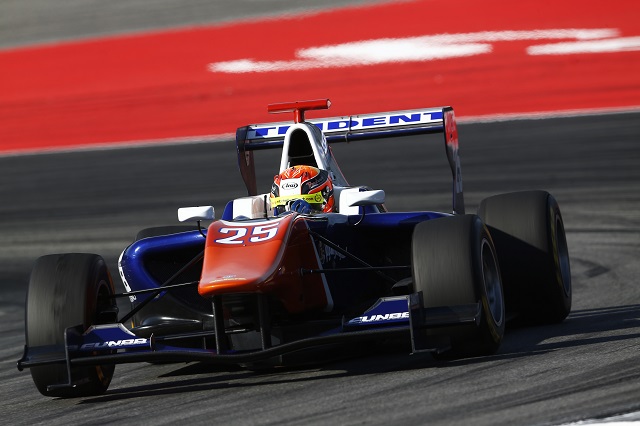 Mitchell Gilbert switched from the FIA European Formula 3 Championship to join the GP3 Series for the round at Silverstone, joining the Trident Racing team for the rest of the season.

The Australian left the Fortec Motorsports team behind in European F3 but his debut in GP3 did not go to plan after a big crash at a very wet Silverstone. He believes he has learnt a lot in the subsequent races in Germany and Hungary.

“I think the races have actually been better than they’ve looked,” said Gilbert to The Checkered Flag. “I’ve been massively under prepared. The car and tyre in particular are so different. Silverstone obviously wasn’t the best start and I learnt very little. We came back strong in Hockenheim starting race 1 from p5, my first time on the soft compound. Even Budapest was decent. I set the fastest lap of the race 2. I’m struggling with the hand clutch, so even if 9 tenths of the weekend are there. My starts wreck the races.”

Gilbert’s debut event was meant to be at Silverstone, but his weekend was cut short by a huge accident with the Hilmer Motorsport machine of fellow debutant Sebastian Balthasar. He was unsighted in the spray and hit the slow moving Balthasar down the Hangar Straight, and was lucky to be able to walk away from the accident after ending up upside-down with a broken roll hoop.

“It was terrifying and I’m thankful that despite the roll hoop failing, the car and all my kit stayed in tact and I’m still here,” said Gilbert. “However, it was a strange crash on the straight so I didn’t really worry about it when I got back in the car.”

The Australian came back strongly in Germany, taking an excellent fifth on the grid. He admitted he struggled with the tyres at both Hockenheim and at the Hungaroring the following weekend, and pretty much used the races to gain some experience that will help him progress.

“Hockenheim we had great pace in qualifying with it being my first time on the soft tyre and I think after more races I can improve on that,” insists Gilbert. “I struggled getting off the line, and [suffered] with massive tyre degradation. [Before] race 2, my first gear broke so I started from the pitlane and had really good pace driving on my own; as good as the leaders.

“In Budapest, qualifying was slightly more difficult but I’m still learning. Race 1, I made an atrocious start and only finished p20 from p12, and [again] had big tyre degradation. In race 2 my start was much better, but I did a drive-though the pitlane to get some space from the field and learn. I set the fastest lap time and was on average 5 tenths to 1 second quicker than the leaders, so I think we are learning loads.

“I think both [Germany and Hungary] had some big positives.”

Gilbert admits he needs to put a weekend together before working out how he will approach the rest of the season, but feels he already fits in at his new team, who the Australian feels all believe in him.

“It’s difficult to say,” admits Gilbert when talking about approaching the rest of the year. “First of all I need to put a whole weekend together. I think we have good pace, in qualifying and cool temperatures in particular. We still need to find some speed in the hot race 1’s, but we are quick.

“I want to continue impressing in qualifying, and try and help the team move everything in the right direction so we can maximise each other. I think we need to approach it as learning and we’ll achieve along the way.

“It’s a very welcoming atmosphere [at Trident]. I feel like I fit in very well. The team has a good structure, which makes in feel like a family. I have an extremely good relationship with the team manager, the engineers and mechanics. I feel like I belong and that we have a future together.

“They are Italian, so very passionate, and that motivates me even more. I feel that everyone believes in me.”

Gilbert stepped away from the FIA European Formula 3 Championship to move to GP3, but was disappointed with how his F3 season materialised. He believed he had a good car at Fortec Motorsports, but found a distinct straight-line speed disadvantage frustrating. He felt that a move away from F3 was the right move, as he feared that people would give up on him if he had continued as he was.

“Honestly, I think there’s not a nice way I can put this so I’ll keep it short,” stated Gilbert. “I spent most of the season missing a lot of straight-line speed to the other Mercedes cars, so we didn’t see any point in continuing. I think the Fortec car was good, and we often over performed, so I’m happy with the time I spent there.

“[It was] very frustrating, extremely frustrating. We had a good car and I’m sure I was doing a good job, but we only managed to achieve one fifth place at Pau. Spa topped it off for me, when I was 18km down on the highest Mercedes car and about 10km on most people. I know we had a good car and it hurts me to think we couldn’t do better than we did.

“My mission was to get my career back on track. 2013 was tough and took me right off the map. After testing with Fortec at the end of the season, I knew it was going to turn around. The car was mega, and I felt good there. Unfortunately, it didn’t work out, but I am definitely a much, much better driver after my time in F3 and I can’t thank everyone who still believed in me after my time in f3 enough.

“I think my FIA F3 career masked my potential, and I’m happy some people still believe I am the real deal. GP3 is where I want to be next year and challenging for Race 1 wins and podiums. If we are doing that, we will be in the mix.”

Gilbert admits that the ultimate goal for his career is Formula One, and he is aiming to follow in the footsteps of Australia’s most recent racers in the series Mark Webber and Daniel Ricciardo. He is hoping to show off his potential on track to get there, and joked that he has a plan with regards to the commercial side of the sport that seems to be getting more and more important.

“When I close my eyes at night all I see is F1,” said Gilbert. “I’m not in the greatest place at the moment to be thinking about it, but it will turn around soon enough. On the driving point of view, we need to start consistently maximising my potential and getting results every weekend. That will come with more time in this car and with this team.

“On the commercial front, we have our own top secret plan that’s going to get us where we want to.”