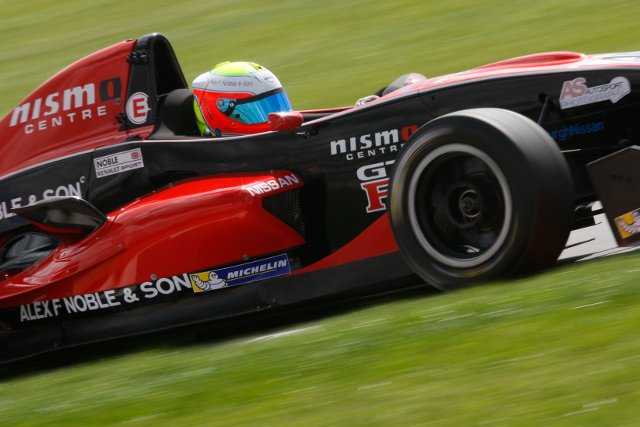 Colin Noble Jnr held off a late charge from Piers Hickin to take his maiden Protyre Formula Renault Championship victory in the penultimate race of the season at Silverstone.

The MGR Motorsport racer converted pole position into a lights-to-flag victory, but the category rookie had to work hard for it on the final lap.

After losing ground to the leader in the early stages, Hickin mounted a fightback in the closing laps and was right on the leaders tail with one lap to run.

The Scorpio Motorsport racer made a challenge into Brooklands/Luffield for the final time and emerged from the complex side-by-side with the leader, but Noble got his fast pedal down and took the victory by just 0.060 seconds.

Behind, there was another two-man battle for third between MGR team-mates Matteo Ferrer and Pietro Fittipaldi. Ferrer held the spot for the majority of the race, but had the championship leader breathing down his neck.

Their battle came to a head on lap thirteen when unfortunate contact with the back of Ferrer’s car into Becketts span the Italian round, giving Fittipaldi a clear run to set the fastest lap of the race en-route to what he thought was his eleventh consecutive podium finish.

“Matteo blocked me going into turn two,” Fittipaldi told TCF. “I went to the outside to cross him over at the exit, but he slowed down, tried to cut me off and stopped the car as I accelerated. We’re quick though and are going for the win tomorrow.”

Post-race though, Fittipaldi was given a ten second penalty for the contact to put him behind Ferrer to fourth in the final results. Ferrer had briefly slipped to fifth behind TJ Fischer, breaking up a lonely race for the American who took fifth.

Alex Gill fought back from a problem off the line that left him a distant ninth on the opening lap to take sixth, with Patrick Dussault following him home. Completing the finishers meanwhile were SWB Motorsport pairing Michael Epps and Jack Butel, the former’s chance of fighting for a top six finish being lost at the start when he was held up by the slow-starting Gill.