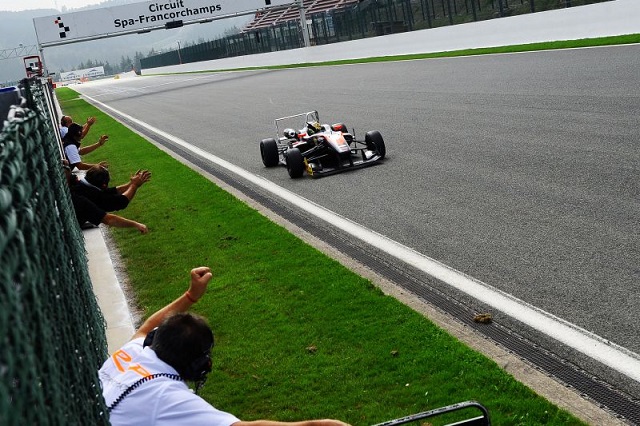 Sandy Stuvik took a lights-to-flag victory in race two at Spa-Francorchamps as he took control of the EuroFormula Open championship with his second win of the weekend and his fourth in a row in the series.

The RP Motorsport driver was on dominant form as he beat his team-mate Artur Janosz by over thirteen seconds, while Yu Kanamaru of Emilio de Villota Motorsport completed the podium.

Konstantin Tereschenko of Campos Racing made a good start to run second early in the race, but quickly lost places to Janosz, Kanamaru and Yarin Stern of Team West-Tec F3, before colliding with Christopher Hoher of BVM Racing and retiring.

Stern finished fourth, but Alex Palou lost ground in the championship to Stuvik by finishing down in fifth for Campos Racing, and was just about able to hold off Andres Saravia at the line, with the Guatemalan driver being forced to settle for sixth after a spin on the opening lap after starting on the front row.

The next double header will be held on the historic Italian circuit of Monza at the end of September, with Stuvik heading into Italy with the aim of clinching the EuroFormula Open championship, while Palou and Janosz will be hoping to close down the gap.