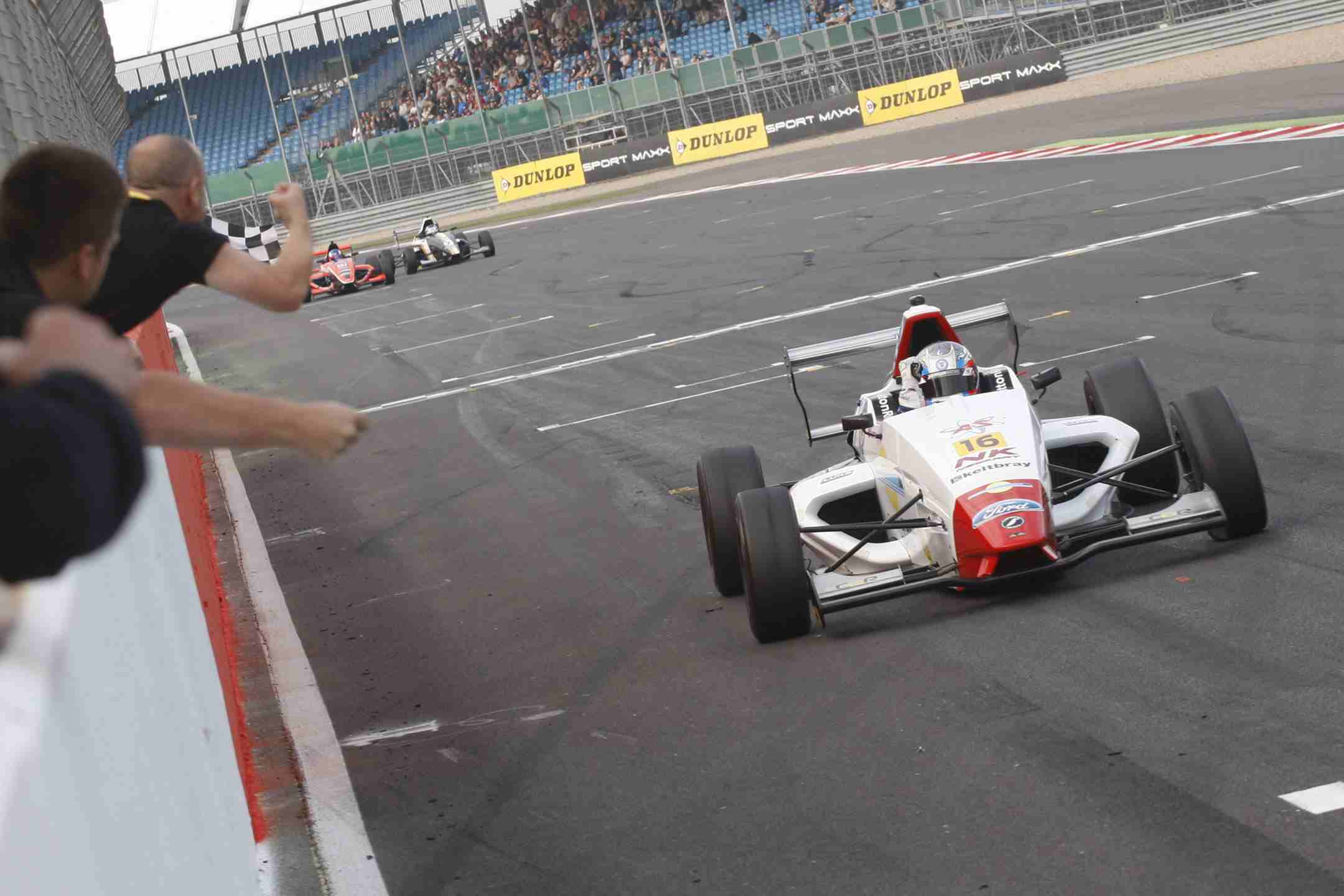 Ashley Sutton has claimed victory in the second of three Dunlop MSA Formula Ford Championship of Great Britain races at Silverstone. The MBM Motorsport Scholarship class runner took the overall win, confirming himself as the Scholarship winner for 2014 in the process, while main title protagonists Harrison Scott and Jayde Kruger bounced their way round the first lap.

As Sutton romped away at the head of the field, Falcon Motorsport’s title leading driver Scott was spinning to the back of the pack. Contact between him and the JTR Motorsport run Kruger put Scott on the back foot. The clerk of the course investigated but judged the move to be a racing incident, Scott disagrees. He said, “I think he caused an incident which could have been avoided and it nearly put me completely out of the race. It’s disappointing.”

With Sutton jumping from fourth to second on the opening lap, displacing Juan Rosso of Radical Motorsport and his team mate James Abbott before heading off to harass pole sitter Ricky Collard into a mistake. The Falcon Motorsport Scholarship runner, the only other driver who could have taken the class title from Sutton, built a 1.1 second lead in the first lap but couldn’t keep a determined MBM machine away.

Lap ten saw the move at Luffield before Sutton rocketed away at the head of the field. Collard fell behind Abbott and Kruger in the remaining laps to finish fourth overall. Sutton claimed his fifth win of the season and his fifteenth scholarship victory in the 26 races so far. Collard quickly paid tribute to Sutton’s championship win saying, “I want to say a big well done to Ashely. He has driven brilliantly all year.”

Sutton on the other hand praised the challenge that Collard provided calling him a ‘Great rival’.

James Abbott’s second place provided him with birthday champagne, well deserved after holding off Kruger since lap sixteen of twenty-two on his 21st birthday. Kruger’s third place alongside Scott’s disappointing result of eighth gave his title campaign a boost with Collard the first man off the podium.

Juan Rosso took fifth place ahead of MBM’s Michael O’Brien and Louise Richardson for her family team Richardson Racing. Seven and eight seconds formed the distance between O’Brien and Rosso and Richardson respectively so there was little pressure on the relative newcomer to the championship. Scott stood a further five seconds behind Richardson with Ovie Iroro’s machine in ninth. Greg Holloway for SWB Motorsport rounded out the top ten with rookie Jessica Hawkins for MBM the final classified runner.

Chris Mealin’s Falcon machine and Clay Mitchell for JTR both retired on the second lap. The race went from bad to worse for JTR a lap later with Mitchell already out and Kruger under investigation when Max Marshall also called it a day and parked up.

The final race of the day takes place in the afternoon session.