Marquez Too Strong For Rossi In Malaysia 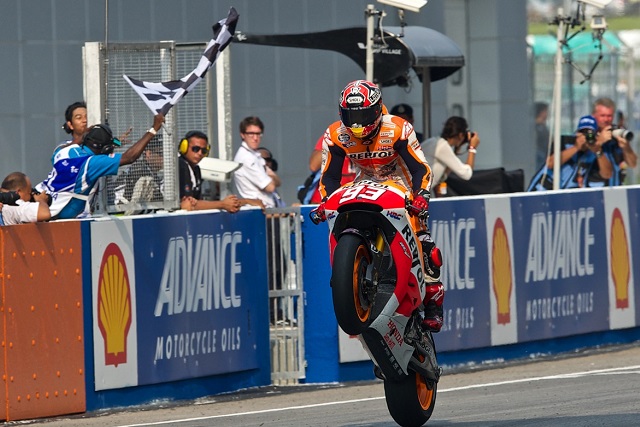 Marc Marquez ended his winless streak in style by winning the Malaysian Grand Prix after a race-long tussle with Valentino Rossi. The two fought out another entertaining duel at the front with Marquez finally edging away in the closing laps with Rossi holding off Yamaha teammate Jorge Lorenzo for second.

Lorenzo began the race with a purpose, charging up the inside of Marquez into turn one and pushing the world champion down to sixth, before a cleaner move saw him wrestle the lead away from Dani Pedrosa at turn fourteen. Pedrosa began the race as the favourite for many but any hopes of victory, along with second in the championship, were washed away when the front end of the RC213V folded at the final corner on lap two. Dani did remount and looked set for a top ten finish later in the race but a second crash ended his afternoon for good.

In his absence, Marquez was left to carry the Repsol Honda challenge and the world champion calmly repaired the damage created at the start. By the end of lap three, Marc was back up to third and when Lorenzo’s rapid early pace began to tail off, the 21 year old followed Rossi past the no.99 Yamaha on lap ten.

With Jorge becoming an increasingly distant third, the stage was set for another titanic battle between Rossi and Marquez but an error from the Italian at the final corner handed Marc the lead on lap eleven. Rossi bravely held on to the tail of the Honda, having several looks up the inside into turn nine in particular, but the pace finally told in the final four laps as Marquez eased to victory by 2.4s.

Lorenzo took third while Stefan Bradl held off a fast-finishing Bradley Smith for fourth despite a last corner lunge from the Briton. Pol Espargaro rounded off an excellent day for Tech 3 by finishing sixth, broken foot and all, while Yonny Hernandez took a career-best seventh after overhauling a fading Andrea Dovizioso. The Italian eventually limped home in eighth but Ducati will be keen to forget their visit to Sepang with Cal Crutchlow’s GP14 breaking down on lap five.