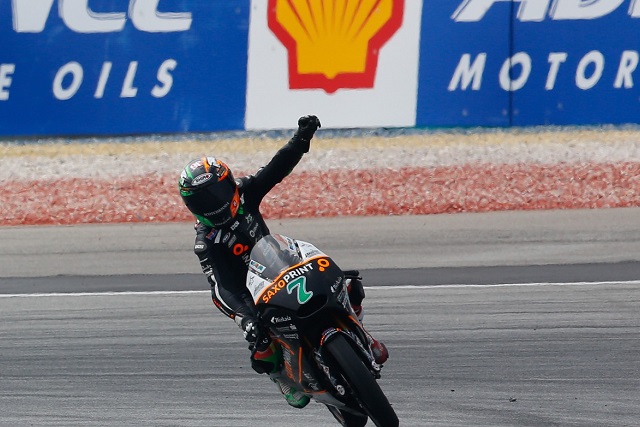 Efren Vazquez made full use of Honda power to take his second victory of the season at Sepang as Jack Miller ensured the championship battle would go down to the wire with a brave, battling second place. Miller’s aggression was a feature of the race with the Australian trying everything to unsettle Alex Marquez and with his title rival finishing down in fifth, Jack’s effort was ultimately rewarded.

The pattern of the race was established early on with Miller regularly pushing to the front on the brakes only to be swallowed up by a pack of Hondas on the straight. With little help from the KTM riders, Miller was forced to use every trick in the book to stay in contention, including a couple of rather brutal moves at turn one which forced Marquez to sit up.

With a lap to go, Miller had Vazquez tucked into his slipstream with the second Saxoprint Honda of John McPhee also in close company, right on the tail of the two Estrella Galicia teammates. The shuffling among the leading group of five brought Danny Kent back into play with the Briton charged with the task of assisting Miller’s championship challenge.

Alex Rins wasn’t playing such a role for his teammate Marquez and dived through into the lead at turn one while Marquez was given a bloody nose by Miller for the third time, Jack running the no.12 Honda wide at the first corner and demoting him to sixth. That would become fifth when John McPhee slid out at turn six but Kent was playing the crucial role of rear gunner for Miller, keeping Marquez quiet.

Miller had enough on his plate with Vazquez and Rins setting their sights on victory and at the final corner, Rins left his braking late enough to edge out the Australian. With both losing momentum, Vazquez was the beneficiary of a second Moto3 victory while Miller won the drag race to the finish line for second, pipping Rins by 0.172s. Kent played the perfect team role from an Ajo point of view by beating Marquez to fourth, allowing Miller to gain nine points on his rival and close to within eleven heading into the final round at Valencia.