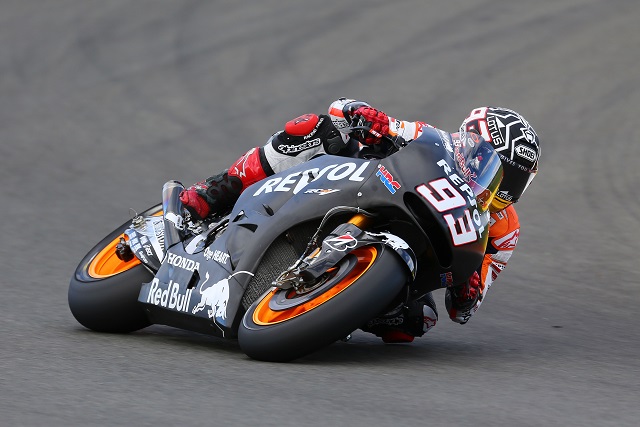 Marc Marquez set the pace in testing at the Ricardo Tormo Circuit as preparations for the 2015 MotoGP season began in earnest in Valencia. Hours after winning the final race of 2014, the world champion was back aboard his Repsol Honda with attention turning to the defence of his title.

The Marquez brothers had many seeing double on Monday (Photo Credit: Repsol Honda)

Marquez was central to one of the most memorable moments from the test’s opening day with Marc joined by his brother Alex who was granted a ride on the RC213V as reward for winning the Moto3 title. The pair circulated together for half an hour on Monday afternoon with Valentino Rossi getting in on the act too, providing no shortage of entertainment for the spectators.

With Marc not setting a representative time on Monday, Jorge Lorenzo led a Yamaha 1-2-3-4 with the Tech 3 riders splitting Lorenzo from his teammate Valentino Rossi. Marquez would ultimately climb to the top of the leaderboard on the final day, although his quickest lap didn’t come on the 2015 prototype, instead coming on the 2014 model.

Lorenzo’s Monday benchmark would end up as the week’s second quickest time, just two thousandths of a second shy of Marquez, with Pol Espargaro and Bradley Smith failing to better their day one times either, finishing third and fifth either side of Dani Pedrosa. Andrea Iannone and Andrea Dovizioso finished seventh and eighth for Ducati, just ahead of the impressive Danilo Petrucci who made his debut on the GP14 for Pramac, while Cal Crutchlow shrugged off a spill on the wet second day to take tenth on the LCR Honda. Scott Redding also got his first taste of factory Honda machinery and clocked the seventeenth fastest time. 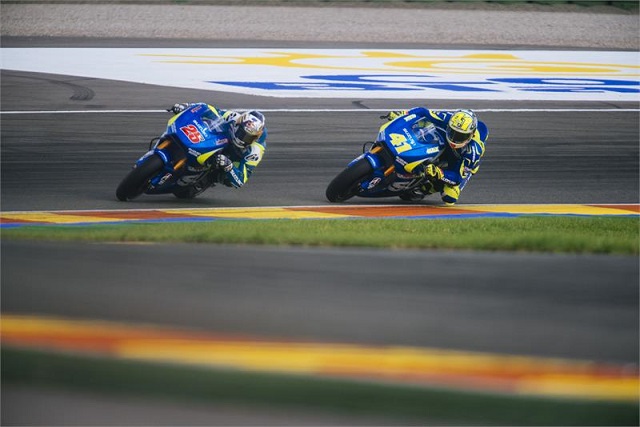 Suzuki were pleased with the performances of Espargaro and Vinales (Photo Credit: Suzuki)

There was no shortage of interesting new arrivals with Suzuki kicking off their 2015 campaign with Aleix Espargaro and Maverick Vinales. The 2014 open class winner gave the returning squad a major boost by finishing just a second off the ultimate pace in twelfth while Vinales spent the week exploring the limits of the GSX-RR, occasionally going over it.

Aprilia also got the ball rolling on their MotoGP return with Alvaro Bautista getting his first run-out for the Italian manufacturer on Monday afternoon, joined by his likely teammate Marco Melandri. Melandri wasn’t the only arrival from the World Superbike paddock with Eugene Laverty getting acquainted with the Aspar production Honda while Loris Baz showed impressive wet-weather pace on Tuesday aboard the Forward Yamaha, clocking comparable lap times to Marc Marquez in torrential conditions.

Quartararo makes it back-to-back poles as Marquez drops out