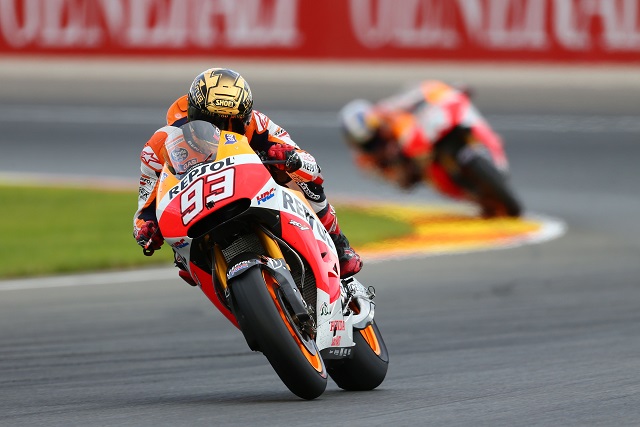 Marc Marquez completed a golden year for the Marquez family with victory in the season-ending Valencia Grand Prix. A matter of hours after his younger brother Alex clinched the Moto3 title, Marc stormed to his thirteenth victory of 2014, breaking the record for most wins in a premier class season. Valentino Rossi took second ahead of Dani Pedrosa, securing the runner-up spot in the process.

All eyes were on Rossi after his spectacular pole position 24 hours earlier but the Yamaha rider was beaten off the line by compatriot Andrea Iannone, the Pramac rider romping into an early lead. Light drizzle led to the appearance of the white flags, indicating that flag-to-flag rules were now in force, but Iannone was more than happy on his slick-shod Ducati, pulling 1.5 seconds clear of Rossi and Marquez.

As the rain relented, the pre-race favourites came back into play with Iannone’s lead soon reduced to nothing. Rossi wasn’t the man to end his spell at the front though with Marquez diving past his rival at turn eight on lap ten before pulling an identical manoeuvre next time around, demoting Iannone to second. Andrea fell prey to Rossi and Pedrosa on lap twelve but a podium finish still wasn’t out of the question, that was until the Italian outbraked himself into turn eight on lap sixteen, falling to seventh.

A second mini-shower in the second half of the race briefly brought Rossi back within striking distance of Marquez but the world champion had matters well under control, cruising to a comfortable victory in the end. Rossi and Pedrosa completed the podium with Valentino’s second place ensuring he would see off Jorge Lorenzo for second in the championship. Jorge himself endured a nightmare end to a disappointing season, running as low as seventh early on before making a strange decision to change motorcycles when light rain fell in the closing stages. After realising his error, Lorenzo withdrew from the race having already lost the thick end of a lap while Iannone was left to rue an identical error which relegated him to 22nd.

Ducati still had something to smile about with Andrea Dovizioso and Cal Crutchlow finishing fourth and fifth respectively while Pol Espargaro brought his Tech 3 Yamaha home in sixth to finish as the season’s top satellite rider, his position rubberstamped by a crash for Bradley Smith. Open champion Aleix Espargaro was seventh ahead of Stefan Bradl and Michele Pirro while Scott Redding rounded off his rookie season with tenth place.

Quartararo makes it back-to-back poles as Marquez drops out

Petrucci – This championship will be a surprise for everybody