Mike Bushell put his name in the history books as the first champion in the fourth-generation era of the Renault UK Clio Cup after overhauling Josh Cook in a fascinating 2014 championship duel.

The fourth-gen Clio was introduced to the series at the start of the season after making its debut in Europe last year, and the turbo-charged racer certainly continued to provide the characteristic brand of frenetic, action-packed racing synonymous with the BTCC-support series.

Bushell v Cook Goes Down To The Wire

In a grid that grew from a low of eleven to sixteen by the final meeting of the year at Brands Hatch GP, it was third year runners Bushell and Cook who eventually emerged as the title contenders in a two-horse race for the honours.

Cook headed the standings for a long period over the course of the season, a double victory on weekend two at Donington Park kick-starting his title challenge after a late switch to SV Racing and the KX Akademy on the eve of the season.

Following seven podiums in the first eight races, another double victory at Snetterton in August was amongst six for the year for Cook, the most wins of any driver on the grid, but drama at Knockhill and Rockingham derailed his challenge just as Bushell was hitting peak form.

It had proved to be an up and down first half of the season for Bushell. While his pace was good with three early podiums including a maiden Clio victory at Thruxton, he was hampered by a crash at Donington, a roll in qualifying at Oulton Park and a generally tough meeting at Croft.

That left him 34 points adrift of Cook heading into the summer break, but hard work over the five week interlude paid off on the return to action at Snetterton in August, a double pole in qualifying starting a run of five in a row for the Team Pyro racer.

While incidents and stewards penalties led to three lowly finishes and a retirement at Knockhill and Rockingham for Cook, Bushell converted his qualifying dominance into three wins in four races to completely swing the title pendulum in his favour.

That meant the 25 year old headed into the finale weekend at Brands Hatch GP with a 28 point lead atop the standings, and despite Cook winning the penultimate race, a pair of top four finishes secured him Pyro’s sixth title win in seven years.

Stilp And SV Star With Silverware

While Bushell eventually won the title by 43 points from Cook, the same margin of points would separate the next five drivers in the standings, showcasing just how competitive it was at the front of the field throughout the campaign.

Heading that pack to secure third in the points was Jordan Stilp, a hugely impressive second campaign in the series ending with the Graduate Cup title. After a consistent start to the season, the 20Ten Racing ace burst into the podium picture with a weekend of pure dominance at Croft.

A clean sweep of the pole positions, race wins and fastest laps in Yorkshire set him up for a great second half of the year. With four more podium finishes to his name, were it not for dropped scores, Stilp would have finished up just one point shy of Cook in the final standings.

To score that top three finish, Stilp had to overcome a trio of KX Akademy graduates at SV Racing, Alex Morgan, Ant Whorton-Eales and Ash Hand, who all hoped to join their stablemate Cook at the head of the standings.

The season started in perfect style for Morgan and the team with a dominant pair of victories at the Brands Indy opener, and it continued with Cook’s double at Donington on a weekend which saw the team card a superb 1-2-3-4 finish in the second race.

Morgan finished third in that one, but from there it proved to be a really tough campaign for the reigning vice-champion. On-going car troubles and a fair chunk of bad luck meant it wasn’t until the Brands finale that he returned to the podium, a third and a second giving him sixth in the points.

Finishing up two places ahead was Whorton-Eales after another strong campaign. The third year runner was a consistent presence at the head of the field, posting six podium visits and thirteen top six finishes in eighteen races, however he did miss out on adding to his one Clio victory to date.

For the final member of the KX quartet, Hand, the season proved to be a frustrating one. While his pace was undoubted, as three second place finishes showed, Hand found himself caught up in the rough and tumble of the Clios on a few occasions and ended a lowly eighth in the standings.

After locking out half of the top eight of the standings, SV Racing were comprehensive victors in the Teams Championship, their hugely impressive campaign yielding a total of 8 race wins, the same number of pole positions, 26 podium finishes and 43 top six results.

For three-time Clio champion Paul Rivett, 2014 presented a new challenge with a driver/team manager role at series newbies WDE Motorsport. Helping turn them into a front-running outfit from the off, Rivett notched up four second places through the year before finally grabbing a win in the final race at Brands.

While the series stalwart was never truly in contention for a fourth crown, finishing seventh in the points, he did come away with some silverware at the end of the year after emerging victorious in the Masters Cup, having been eligible for the class for the first time.

To win that trophy, Rivett had to overcome early leader Lee Pattison. The Pyro racer thrived at Thruxton early on with a pole and a podium, adding another top three finish next time out at Oulton, however he found the going tougher as the season worse on and eventually sat out the Brands finale.

For another experienced Clio racer, James Colburn, it proved to be a campaign that promised much but didn’t quite deliver with an early championship push, aided by wins at Thruxton and Oulton, fading away as the season progressed.

Those victories were part of a run of five podiums in six races that left him second in the standings with six races remaining, however a difficult end to the year saw him take just one top six finish in the final three meetings to slip to fifth in the points.

Outside the battles at the front of the field, there were also a number of impressive performances in the midfield pack. One driver to stand out was Charlie Ladell, who joined the series from the fourth meeting at Oulton Park onwards for his maiden Clio campaign.

Ladell instantly settled in the top ten with WDE Motorsport and benefitted from the experience of his team-mate Rivett to push forwards. After securing a best of fourth in his fifth race at Snetterton, he went on to finish the year with three consecutive top six finishes.

Ladell Only Finished Outside The Top Ten Once In Twelve Races – Credit: Jakob Ebrey Photography

Another newcomer to impress was Dan Holland. Entering the fray with JamSport for the final two meetings, the former Ford Fiesta racer showed brilliant racecraft to gain twenty places from his grid starts in just four races, including a superb run to fourth in the final race at Brands.

JamSport themselves were newcomers to the series this year, joining the grid with Paul Knapp at Snetterton. Knapp competed in three meetings with a best finish of eighth, with the team stepping up to two cars for the Brands finale ahead of a planned multi-car entry in 2015.

Pyro’s Rob Smith started the campaign on a high with second in the opening race at Brands, but it went downhill from there for the third year racer and a massive shunt in testing at Oulton Park led to his withdrawal from the series.

Devon Modell notched up three top six finishes on his way to a top ten points finish with Westbourne, while 20Ten team-mates Mark Howard and Craig Milner enjoyed a great fight at the rear of the field throughout the season, Howard emerging victorious with a best finish of ninth.

After a strong 2014 campaign, it’s looking positive for an even better second season of the fourth-generation era of the Clio Cup next year, with entries expected from BTCC outfits Team BMR Restart and AMDTuning.com, a new entry from Team Cooksport, and expanded efforts for WDE and JamSport alongside the returns of SV, 20Ten, Westbourne and co. 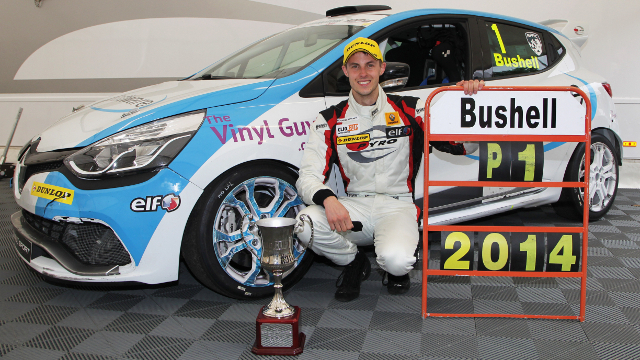