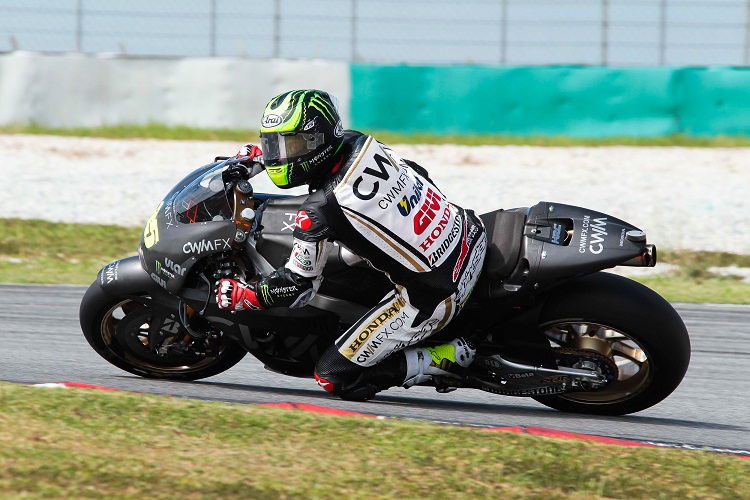 Cal Crutchlow admits he is still working hard to find the limits of his Honda RC213V after two days of testing at Sepang. The Briton spoke on Wednesday of his difficulties exploiting the grip of new tyres on the LCR machine but after encountering a similar issue 24 hours later, Crutchlow was unconcerned, mindful that there are many more test days to come before Qatar.

“I’m pleased with today, we made a lot of progress with my feeling with the bike. Again, we didn’t take my benefit from the new tyre again particularly, we need to still improve in that area. We need to also improve the corner entry as there was a lot of sliding on the corner entry of the bike so this will be our focus for tomorrow on our last day of testing in Sepang. The team’s been working great. We’ve been working hard, doing a lot of laps, but not so many in a row as we’ve been making quite a lot of changes. But tomorrow I look forward to doing a few longer runs and looking for the best settings to be able to come back for the second Sepang test (at the end of the month) and be comfortable.”

CWM-LCR Honda teammate Jack Miller experienced the harsh reality of life as a MotoGP rookie with a crash during the morning session. The Australian admitted his progress was halted quite significantly by the fall but he hopes to bounce back tomorrow.

“So, it wasn’t such a bad day for us, we are learning step by step about the MotoGP bike. We missed this morning because I had a small crash with the old tyres and after that it shook my confidence a little bit. By the end of the day we started to become a bit more comfortable with the bike and we were working on long distance again, working to conserve the tyres. Tomorrow morning we will look to push for a good lap time in the early hours before the temperatures rise too much. All in all we’re sort of happy today, I’m still not where I want to be but we are improving step by step.”