Rossi: Qatar “One of the Best Races of My Career” 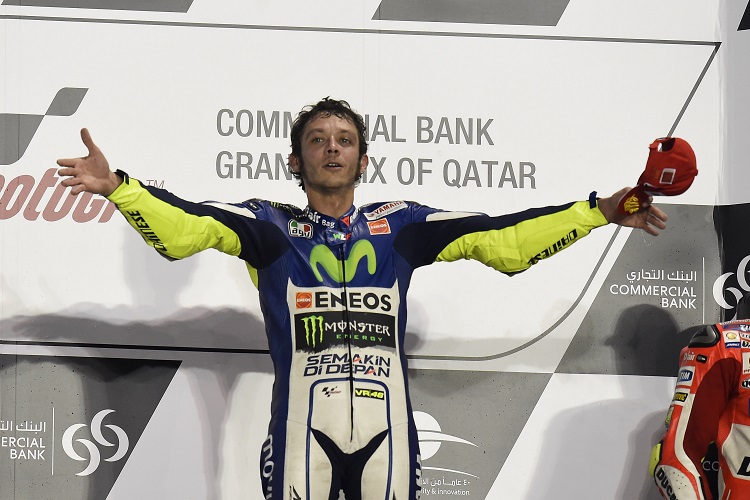 Valentino Rossi says his victory in the 2015 MotoGP season opener at Losail ranks with his very best victories as a Grand Prix rider. The Movistar Yamaha rider won a thrilling head-to-head with Ducati’s Andrea Dovizioso in the closing stages to take his 83rd premier class win and admitted Sunday’s success was particularly special after a tough start to the weekend.

“In the last three seasons I always rode solid races and arrived on the podium but to come back with a victory is another thing. I am so happy because we suffered a lot during the practices and also the tests, but we worked very well for the 22 lap race and I was very strong. First of all you have to be lucky, but especially the work that we do with the team during the weekend makes the difference for my pace in the race. It was definitely one of the best races of my career, considering where we were yesterday. I really have to thank all my team, my engineers and all at Yamaha because I think today we did something amazing.”

Team Director Massimo Meregalli was quick to heap praise on his victorious rider while also acknowledging the mechanics for improving the YZR-M1 over the course of the weekend.

“It has been an incredible start to the season. Vale‘s race was a masterpiece! He rode well and really got what he deserved. Especially considering how we started the weekend, this is a great result. Our target was to start with a victory and we achieved it. I want to say a big thank you to everybody who made this happen. The whole team has been putting in hard work, starting from last week. We now look forward to the next race in two weeks’ time.”

By Justin Nguyen
4 Mins read
NBC plans to end NBCSN before the end of 2021. Motorsports like NASCAR, IndyCar, IMSA, and MotoGP, which have races on the network, will have to look for alternatives in the NBC family like USA Network.
MotoGP