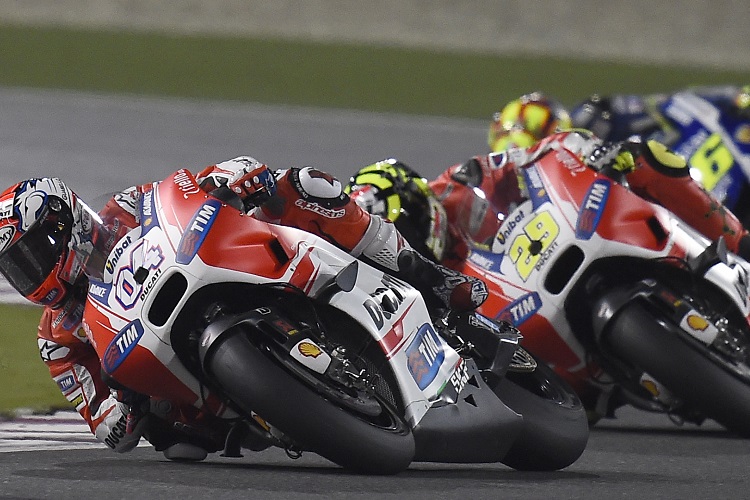 Ducati will lose the first of their concessions at next weekend’s Grand Prix of the Americas as a result of their success in Qatar on Sunday. The manufacturer have had the option of running with 24 litres of fuel during a race since the start of 2014 but from Texas onwards, that option will no longer be available to the Bologna-based squad.

After the introduction of the open class, Ducati have continued to run as factory entrants with a number of the concessions available to those open bikes, including softer tyres, extra engines over the course of the season and exemption from the freeze in engine development.

However, having now claimed three podium finishes since Qatar 2014 (Dovizioso’s in Texas last season and the double podium on Sunday), all Ducati machines entered as factory options will now be restricted to 22 litres of fuel during a race in accordance with Article 2.4.4.5.5 of the FIM Road racing World Championship Grand Prix Regulations, a ruling which applies to Andrea Dovizioso and Andrea Iannone as well as the Pramac machines ridden by Yonny Hernandez and Danilo Petrucci. The Avintia Racing Ducatis of Hector Barbera and Mike Di Meglio are unaffected as they run as full open class entries.

Should Ducati take three Grand Prix victories over the course of 2015, they will no longer be allowed the run the softer option tyres although the concessions on engine usage and dev elopement will stay in place however successful they are.