Lorenzo Leads the Way on Friday at Jerez 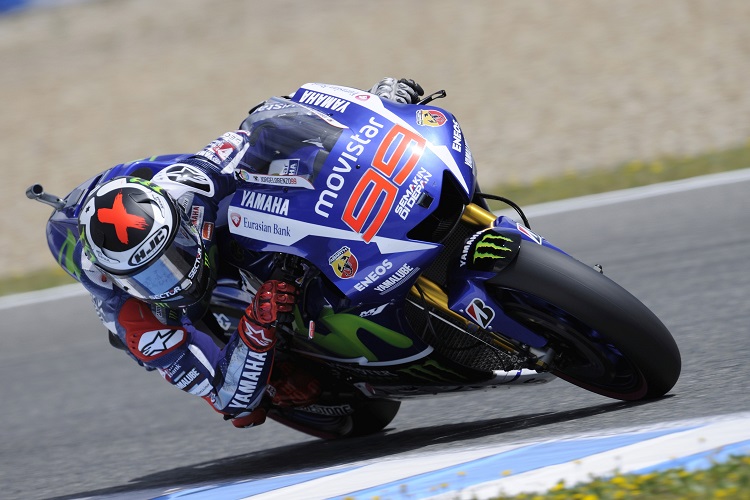 Jorge Lorenzo made all the headlines at Jerez on Friday by setting the pace in both practice sessions on the same day he agreed a one-year contract extension with Yamaha. The Spaniard was the class of the field in two contrasting sessions but the biggest news of all came during the lunch break when his place at Movistar Yamaha for 2016 was officially confirmed.

Cooler conditions greeted the riders early on Friday morning for FP1 and Lorenzo’s fifth lap of the morning would ultimately prove the fastest, the two-time champion clocking a 1:39.174.  Jorge had enjoyed a half-second lead at the top of the leaderboard until Aleix Espargaro sprung up to second on the Suzuki, just half a tenth adrift.

The temperatures climbed significantly for second practice and as a result, the lap times were a shade slower than earlier in the day. Marc Marquez was one of the riders to improve, clearly feeling more comfortable with his injured finger after a cautious morning, but Lorenzo would outpace the reigning champion by a tenth of a second to top FP2.

The Ducatis of Andrea Iannone and Andrea Dovizioso were third and fourth in the afternoon, just behind Marquez, ensuring they would end the day in fourth and fifth respectively as Espargaro’s morning time remained good enough for second. Danilo Petrucci found time in FP2 to take sixth overall ahead of Cal Crutchlow and Pol Espargaro with championship leader Valentino Rossi only ninth, clearly struggling with his Yamaha YZR-M1 in the afternoon heat.