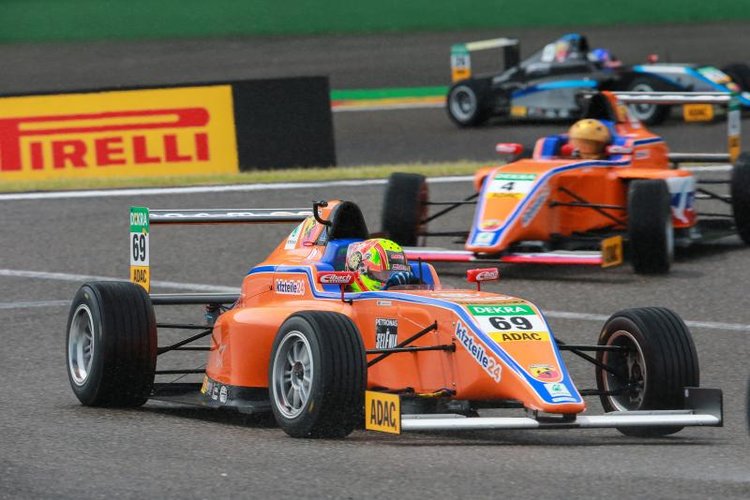 An excellent drive from, Lando Norris sees him take victory in only his third ADAC Formula 4 race. He made a good start from seventh and set about chasing the leaders. Once he took the lead, he never looked back and cruised to victory, putting him fifth in the championship.

The reversed grid from race one had seen Marek Bockmann on pole, he made a good start and drove away from the cars behind. Meanwhile Janneau Esmeijer‘s race was ruined when Ralf Aron hit him in the first turn spinning the car round. Both competitors would not pick up any points.

Giorgio Maggi had started second but quickly fell down the order, being passed by Norris within the first lap before being demoted out of the points. However; not everyone got past cleanly as David Beckmann damaged his front wing affecting his pace.

By lap three, Norris had caught up with Bockmann while Guan Yu Zhou was some distance back in third. After a lap, Bockmann gave up the lead, as Norris built up a large gap.

Behind them, Joey Mawson and Joel Eriksson fought over fourth place, allowing the Neuhauser Racing cars to close from behind. Soon, third to eighth was covered by a few seconds as Zhou fell to the back of the pack after a mistake. The biggest winner had been Mawson who was now promoted to third.

Bockmann would soon be caught by the chasing back as the Jenzer Motorsport driver found himself losing positions rapidly. He was saved by a safety car, but would only spin at Les Combes at the restart.

The safety car had been caused by a crash with ninth placed Aron who’s car needed to be retrieved. This helped Mick Schumacher who had crashed a few laps prior while fighting with Michael Waldherr. The German had been lapped and was forced to spend the rest of the race at the back.

In the battle for third, Eriksson did well to hold off the competition until the last lap, when Robert Schwartzmann got ahead. Schwartzmann would lose the place soon after but it was not counted after a red flag ended the race prematurely.

A large crash between Jannes Fittje and Mauro Aurrichio saw the Motopark driver shaken after his side pod had been ripped apart by an impact out of Eau Rouge.

After the officials counted the positions back one lap Norris won ahead of Mawson with Schwartzman being given the final podium place. Eriksson was fourth with Kim-Luis Schramm and Tim Zimmermann close behind. Beckmann, Waldherr, Zhou and Alain Valente rounded out the points.