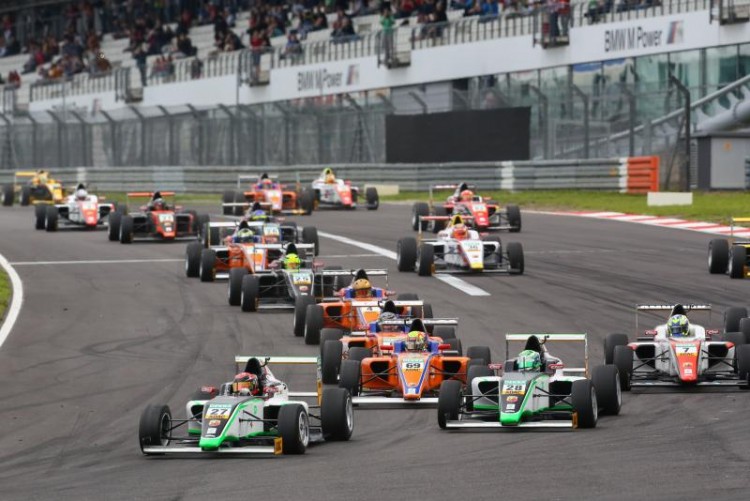 Marvin Dienst won the opening ADAC Formula 4 race of the weekend to lead home a HTP Junior team one-two ahead of team mate Janneau Esmeijer, who had started on pole. The win allows Dienst to close the gap in the championship to the leader.

Having made the best start, Dienst had the inside line and squeezed his Dutch team mate to the outside in turn one. From there he built his lead and despite it fluctuating at times, ensured he crossed the line with a 2.8 second lead.

Esmeijer was unable to keep up in the later stages with Lando Norris catching with five minutes to go. Norris would prove to be the best placed rookie having taken third, but it hadn’t been an easy race for him. Despite taking third at the start, he held up a queue of cars and dropped behind Joel Eriksson in the early stages.

Norris would soon take Eriksson with the Swedish driver falling back in the closing laps, however he did narrowly hang on to third.

Behind were the Mucke Motorsport drivers David Beckmann and Robert Shwartzmann. Beckmann had fallen from his third place start but held on for a good result, while the Russian driver ends his run of six podiums, but did prove his worth having been in a race long battle with Ralf Aron and working his way back up from his poor start.

Aron would eventually come home seventh ahead of Mick Schumacher. The battle between the two reached a peak at the midway stage with the two drivers and Shwartzmann going side by side in a battle for sixth. Aron would lose out, but would regain seventh in the closing stages after a daring move on Schumacher.

Unfortunetly for Schumacher he would drop another place to team mate Joey Mawson on the final lap. Having started only thirteenth, the Australian made a great start before battling his way up to eighth. However; he would lose ground on championship leader Eriksson.

Tim Zimmermann rounded out the top 10 and will have pole for race three after a lunge by Harrison Newey saw him lose momentum and collide with Mike Ortmann behind. Both would fall to the back with Newey taking a trip through the gravel, later retiring.

Dienst closes on Eriksson in the championship, while Esmeijer will once again start on pole for race two at 16:45 local time.