Boyd, Daly and Murray Win Semi’s to be on Front for Final

A good position in the Semi-Finals for the Formula Ford Festival was pivotal, with the drivers race position, determining their grid position for the final and only the top eight making it through automatically.

A stunning run from Wayne Boyd ensures that he took the first Semi-Final victory from Joey Foster in a stunning fight from two of the favourites for the overall Trophy. Boyd had started on pole, but lost the lead soon after, when he ran wide at Druids

Foster took the lead as a result and was forced to defend as the #46 car hit back. Things went from bad to worse for Boyd as he lost another position to Robert Barrable soon afterwards, as Boyd ran wide at Druids once again.

However; Boyd would turn his weakest corner into his strongest, as he used his late braking abilities to hit back in the second part of the race. By lap six, he was fighting Foster and soon took the lead after forcefully pushing through at Druids.

The win will give Boyd pole position for the Final later today, while Foster claimed second place in front of Barrable. Behind them, Stuart Gough, was best of the rest having taken fifth placed Chris Middlehurst in the final laps, thus giving him a place advantage going into the final.

Despite starting at the front, Kevin O’Hara, repeated his feat from Saturday as he fell further back through the field, eventually crossing the line in sixth from a lonely Jay Bridger.

The battle for the final automatic qualification sport saw Adam MacKay come from the back of the grid to claim eighth. A bigger achievement considering he went off at Paddock, during the race, losing three positions as a result.

As the pole-sitter, Daly made a good start and unlike his compatriots in the first Semi, managed to keep his lead as the others battled behind. Luke Williams, who’d started third, managed to force his way into second as Jonny McMullan continued to fall down the order.

After running wide on lap two, McMullan was dropped down to eleventh, leaving him to fight his way back up the order. Meanwhile, Daly and Williams broke away at the front to fight for a potential pole position in the final.
However; all chances of taking the pole, vanished after the safety car made an appearance during the middle portion of the race. It had been caused after two cars further back made contact and mangled up at Druids.

After a number of laps of fighting his way back up the order, last years champion, James Raven had settled into third, but had aspirations of making it much higher. At the restart, he tried to find a way past Williams, but put a wheel on the grass at Clearways, spinning into the barrier and out of the competition.

Daly didn’t dominate, but did hold on to claim his second victory of the weekend from Williams, with the two of them having broken away slightly from the pack.

Rounding out the podium was Dakota Dickerson, with Andy Charsley also getting past the slower cars to take fourth. Geoff Richardson had been running in third for some time, but ended up rounding out the top five by the time the flag fell. 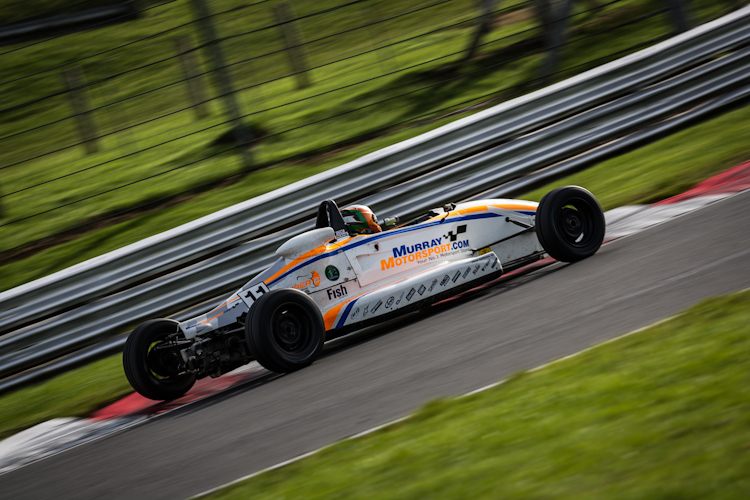 Michai Stephens made a good start and immediately took the lead around the outside into Paddock Hill bend. However; the race didn’t last long after a large accident happened on the first lap, as the cars barrelled down into Graham Hill Bend.

The race was red flagged and the cars lined up on the grid in their original order. After the barrier was fixed, and the cars removed, the grid got going in what would automatically be the slowest heat.

Unfortunately the showdown between the Canadian and the American Scholarship winners did not prevail as Michael Adams was taken out by Oliver White behind, putting them both out.

What this created however; was an intent battle with Stephens leading from the chasing Niall Murray. The American appeared to not have the pace in the dry and was quickly under threat from Jake Byrne. It soon became a five car fight for the lead as none of the leader appeared to break away.

Eventually Murray managed to pull out a small gap over Byrne, but with Melroy Heemskerk and Noel Robinson both pushing the American in third, none of the top five were out of contention. However; a mistake from Murray in the closing laps saw him run wide allowing Byrne to run side by side in the closing laps.

Murray would eventually hang on to win by under a tenth of a second from Byrne, meanwhile, Stephens hung on to claim the final podium, with Heemskerk and Robinson concluding the top five. In sixth was Sam McKenzie who finished after a fairly lonely race, while Miles Nathaniel-James and Ben Tinkler rounded out the top eight.