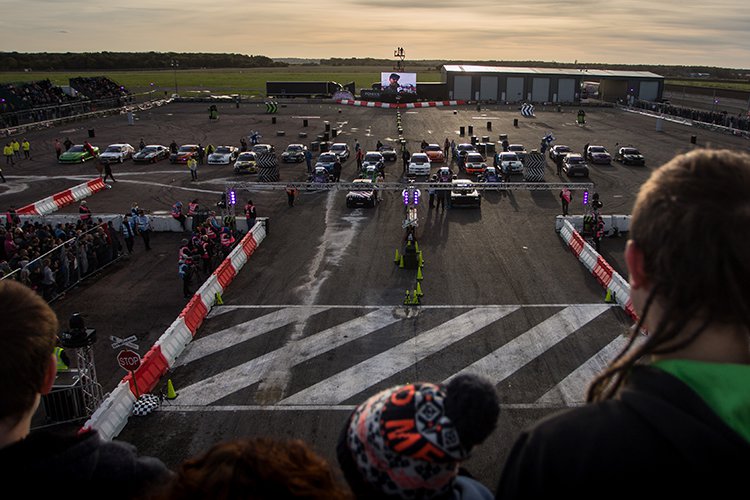 With three classes racing, rear-wheel-drive, all-wheel-drive and buggies, fans were treated to non-stop action all weekend.

“Well it’s quite a lot different to be honest” said Tahko. “In the last ten years I’ve done only four wheel drive cars so it was quite tricky to start with the rear-wheel-drive again and the Buggy is so short and lightweight so all the movements are so quick so it’s not too easy but actually I think we did quite well, we set good times with the cars in the end,”

“I came here to beat Liam (Doran) and I did that. I lost fourth tenths to him yesterday and we didn’t race the final, we had set the rematch for today, but in the end I set better times in the qualifying and I beat him.”

Luke Woodham clinched victory in the rear-wheel-drive category, successfully defending the crown he took in 2014 in what proved to be a hard-fought battle.

His back to back wins make him not just the first driver to defend the championship, but also the first to win two Gymkhana GRiD titles.

“It was amazing, absolutely amazing. One mistake and you’re gone so thankfully I held it together and, yeah, managed to pull it out of the bag, I’m smiling ear to ear,” said the Brit. “I’ve been doing this four years now and I’ve managed every year to be on the podium as well so that’s great.”

The all-wheel-drive category was dominated by Subaru entries and it was British champion Dmitrij Sribnyj who came out on top.

“We had a very good day of practice on Friday so I learned the course and today, out of my memory, performed to my best,” said Sribnyj. “It was great to be here and to be involved in such a great event, I just want to thank everyone.”

Following their respective championship victories, Sribnyj and Woodham faced off against Ken Block and Ryan Tuerck in a pair of ‘Hero Battles’

Scoobyclinic Racing driver Sribnyj faced off against Ken Block in the Hoonicorn while Woodham took on Ryan Tuerck who was driving the brand new Hoonican Escort Mk 2.

Unlike Woodham who was defeated in his battle against Tuerck, Sribnyj capped off the weekend with a dominant display against Ken Block in the Hoonicorn.

“To be on the same track with Ken, it’s something not everyone can have,” Sribnyj added. “Ken’s car was having trouble with the times and I understand it would be very challenging to drive the car in such a competition against a car that was designed to do this, Gymkhana GRiD with the timing, not just for the show.”

Rhys Yates to compete in Gymkhana 2019

By Vince Pettit
3 Mins read
We catch up with Luke Woodham has he chases his fifth Gymkhana GRiD RWD championship title this weekend.