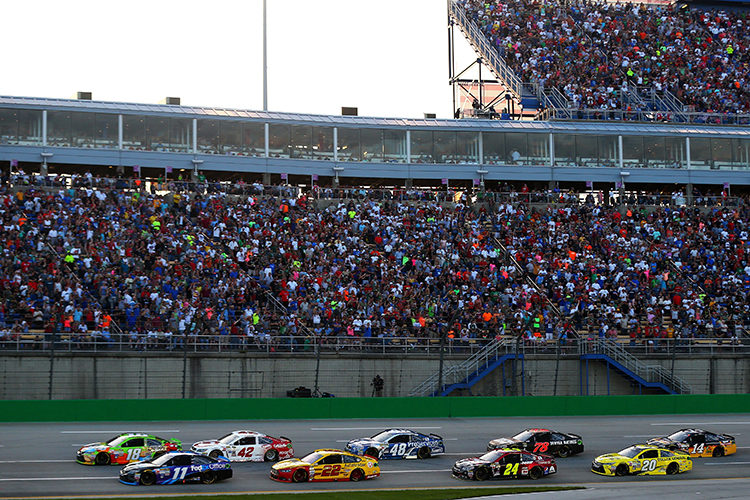 After two successful trial races at Kentucky and Darlington, NASCAR have mandated a new low-downforce package to be used in Sprint Cup Series competition in 2016, on all tracks outside of Daytona and Talladega.

The base package will include a 3.5-inch spoiler, a 0.25-inch front leading splitter edge and a 33-inch wide radiator pan. In comparison, the current package used for 2015 uses a 6-inch spoiler (down from 8 in 2014), a 2-inch splitter and a 38-inch radiator pan. The package is one drivers like Brad Keselowski (who was full of praise for the 2016 package in a shakedown test at Phoenix on Monday), Carl Edwards, Denny Hamlin, Kevin Harvick and more have been pushing for for a long time, and the trial packages used at Kentucky and Darlington this year drew rave reviews from drivers, teams and fans for increasing on-track action and putting more control of the cars back in the hands of the drivers.

Characteristics of the lower downforce rules package includes more off-throttle time for drivers and decreasing corner speeds. This generates more passing zones over the entire track, and allows for multiple tire combinations to be levered. It also reduces reliance on airflow over cars and the effects of dirty air, meaning cars can race closer together nose-to-tail and side-by-side without losing grip. Goodyear will also be developing softer tires to complement the package.

“NASCAR has worked tirelessly with our teams, drivers, manufacturers and Goodyear to develop a rules package that provides fans with the best racing possible,” said Steve O’Donnell, NASCAR executive vice president and chief racing development officer. “The success of the races at Kentucky and Darlington in similar trim proved extremely valuable in accelerating rules development for 2016. Now, as teams have even more time to prepare and a strong baseline of data, we anticipate the racing to be even better.”

There is also talk of lower-downforce packages like this being adopted in the second-tier Xfinity Series and the third-tier Camping World Truck Series. O’Donnell also discussed potentially bringing the engine horsepower levels back up to 850hp from the 725hp they have been reduced to this year, but said high straightline speeds at larger tracks like Michigan and Auto Club made this a non-starter.

In addition to the base package, each track will continue to feature specific rules, including tire combinations and drive train configurations, to create the best racing for each track length, layout and surface. Rear gear ratios will be adjusted to maintain a maximum engine speed of 9,000 RPM and a 1.38 third gear ratio will be used at all tracks smaller than 1.25 miles. The digital dashboard, which was optional for teams during the second half of this season, will be mandatory in all vehicles.

“Our team at the NASCAR R&D Center is constantly looking at the racing, and evaluating ways to continue to improve it,” O’Donnell said. “Using science and technology and qualitative data compiled from world-class engineers throughout the industry as our guideposts, we will always look to make the racing better for our fans.”

The new rules will apply everywhere next season except Daytona and Talladega, the two tracks that host restrictor-plate races. The 2016 restrictor-plate engines will feature roller lifters instead of solid lifters, however, which will add 10 horsepower to the cars. The holes in the restrictor plates will be reduced in size.

Several safety updates have been implemented for next season, including a double NACA duct where a right-hand side window is used, a fire suppression system activation cable routed to the dash or right-hand side leg board and a seat belt restraint system that meets SFI 16.6 specification.

“The core goal for us continues to remain the same, and that’s to deliver the best and safest racing possible for the fans,” O’Donnell said. And judging by the sweeping sense of excitement across the NASCAR world, from fans, drivers, teams, media and beyond, NASCAR will be taking a big step towards that goal in 2016.

Ironically, in the year Marty McFly predicted the Cubs might win the World Series, we might just be going back to the future after all – and NASCAR might be about to rediscover its soul.

By Justin Nguyen
4 Mins read
The NASCAR Cup Series race at Circuit of the Americas will be named the EchoPark Texas Grand Prix (a term not common in NASCAR). In advance, Chase Elliott, Martin Truex Jr., and Brad Keselowski will do a tyre test next Tuesday.
NASCAR Cup SeriesNASCAR Truck Series

By Justin Nguyen
4 Mins read
NASCAR Cup points leader Denny Hamlin will start on the pole for Sunday’s race at Homestead, while Xfinity championship leader Austin Cindric will do the same for his series’ race the previous day.