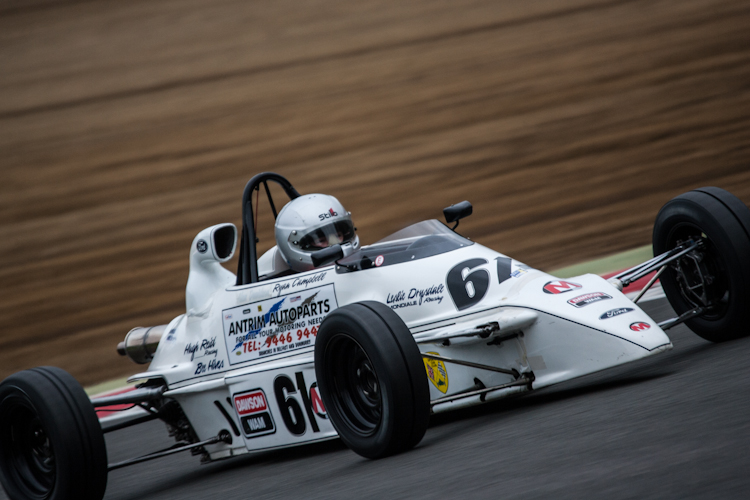 Mixed in with the Post ’89 Formula Ford cars during the event was a range of cars from previous generations. Because of the power difference, only four of these car managed to qualify for the final. As a result a historic race was held to determine the winner for the cars from a better time.

The race saw Ryan Campbell claim victory in a close competition that saw three cars duke it out at the front over the course of 10 laps.

The race started with Conor Murphy on pole, however; an early challenge from Matthew Crowley saw him take the outside line. Unfortunately for Crowley in the #177, he was not able to make the move stick and was dropped further down the order, meaning he’d have to work back up throughout the race.

All of this promoted Campbell into second and right behind the leader as the field made their way through Druids and onto the back straight.

Not all them made it though, as a three car pile up in the midfield, saw the order mixed up once again, with a Safety Car soon being called. The crash had seen Bernard Richard and David Nicholl collide with one of the cars being flung into the barrier, damaging it. The race was stopped as the metal railing was secured at Graham Hill.

Just before the safety car had been called, Campbell had taken the lead with Murphy dropping to second and Cowley back into third as the race was restarted.

As the green flag waved, the quick starting Cowley made another good start and immediately challenged for second as the cars made a cleaner getaway. Meanwhile, Stuart Kestenbaum in the van Diemen RF79 moved up another position to secure fourth and challenge Murphy.

It became clear that Campbell wasn’t breaking away, as the top six were all within a second of each other by the half way point, with Murphy the quickest on track. While he wasn’t getting away, Campbell was doing just enough, and was keeping a comfortable distance over Cowley, while Ben Tinkler moved forward to take fourth.

The best overtake of the whole festival saw Murphy get the run on Crowley around the outside of Paddock Hill, before bravely holding on to switch back going into Druids ensuring he had the inside line, taking second.

Campbell was now struggling on rear tyres and made a mistake into Clearways, allowing Murphy to get a run, which he was unable to capitalise on.

In what would be one of the closest finishes of the weekend, the top three were split by no more than 2 tenths of a second going into the final lap. Unfortunately for Murphy though, he ran wide at the final corner getting a wheel on the grass and losing the drag race to Cowley as Campbell won.

Behind the top three, the battle for fourth saw Tinkler hold off the on-form Kestenbaum in the closing laps as Gislain Genecand collected sixth, being one of the five older models to make the final, but was unable to start after a technical issue.