The top two in the Eurocup Formula Renault 2.0 Series standings in 2015, Jack Aitken and Louis Deletraz, confirmed their status amongst the best drivers in the category as each won a title away from the main series.

Meanwhile in the Asia, Dan Wells had an amazing season in the Asian Formula Renault championship to clinch the title.

Seven victories in fourteen races was enough for Jack Aitken to secure the 2015 ALPS title, despite finishing two of those races second and another in third.

Aitken secured the title ahead of Koiranen GP team-mate Jake Hughes, who himself secured four victories as the team dominated the Teams’ Championship.

Wildcard entry Anthoine Hubert started the season with a race one victory at Imola, although Aitken secured the twenty-five points on offer, with the places switching for race two.

Thiago Vivacqua had a strong season to finish third in championship, winning once at Monza for JD Motorsport, while the Brazilian’s team-mate Matevos Isaakyan finished fourth in the standings, winning outright on three occasions, one of which was behind Hubert in Pau, as well as victories in race three at the Red Bull Ring and race two at Spa-Francorchamps.

The only other full-time racer to secure a victory was Vasily Romanov, who took his Cram Motorsport machine to the win in a crazy final race at Monza that was affected by a number of retirements and incidents.

A number of wildcard entries took victories and strong results during the year, with Hubert in particular securing wins in four of the six races he competed in during the season, finishing second in the other two for Tech 1 Racing, while Barnicoat ended the year with a victory at Jerez for Fortec Motorsports. There were also podium finishes for Simon Gachet, Jehan Daruvala, Amaury Richard and even Formula Renault 3.5 Series star Matthieu Vaxiviere! 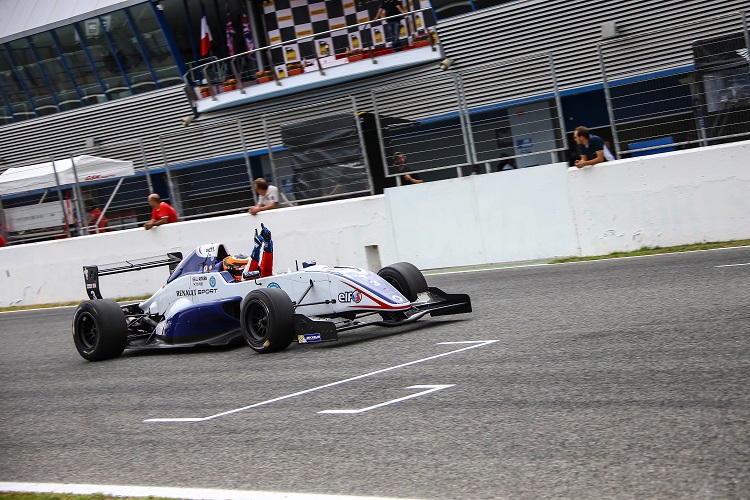 Louis Deletraz had an outstanding season in the NEC championship, winning nine of the sixteen races, including an incredible hat trick of victories at the season finale at Hockenheim that saw him seal the title.

The Swiss driver started the season with five consecutive pole positions, converting three of those to victories, which kind of showed what would happen in 2015, with Deletraz eventually taking twelve pole positions and eight fastest laps on top of his nine victories.

Deletraz took one victory at Monza in race two, before winning both races at Silverstone comfortably, before two runners-up spot and a win at the Red Bull Ring triple-header. He would also take victories at Spa-Francorchamps and Assen before his dominant hat trick at Hockenheim – in fact the only weekend he did not take a victory was at the Nurburgring!

His Josef Kaufmann Racing team-mate Kevin Jörg finished second in the championship, having taken two wins at the Red Bull Ring, a weekend where the two team-mates finished 1-2 in every race.

Jörg finished 73 points behind Deletraz in the championship, but only nine ahead of ART Junior Team driver Ukyo Sasahara, who secured two wins of his own, one at Monza and the other at the Nurburgring.

Max Defourny was the best-placed rookie driver in the championship, finishing fourth in the standings having raced in the first round for Strakka Racing before switching to the ART Junior Team. He took victories at both Spa-Francorchamps and the Nurburgring.

The only other driver to secure a victory in 2015 was Dries Vanthoor, the younger brother to highly rated GT racer Laurens Vanthoor, with the Belgian racer securing his maiden single seater victory for Josef Kaufmann Racing at Assen. Vanthoor finished sixth in the championship standings behind Indian racer Jehan Daruvala and ahead of South African Callan O’Keeffe, both of whom raced for Fortec Motorsports.

Racing for the BlackArts Racing by KCMG squad in 2015, British driver Dan Wells was the undisputed king of the Asian Formula Renault Series.

The Salisbury-born driver joined the series and proceeded to dominate, taking ten wins out of a possible twelve, only failing to win in the opening two races of the season on the series’ first visit (of three) to the Zhuhai International Circuit in China.

Those two wins were taken by BlackArts team-mate Maxx Ebenal, who finished a distant third in the championship behind Wells and KCMG driver Garnet Patterson.

Wells won both races on the series’ only visit to the Sepang circuit in Malaysia, as well as both races in the two additional visits to Zhuhai and both races on both visits to the Shanghai International Circuit.

Ultimately Wells secured 330 points, 107 clear of Patterson and 139 ahead of Ebenal.