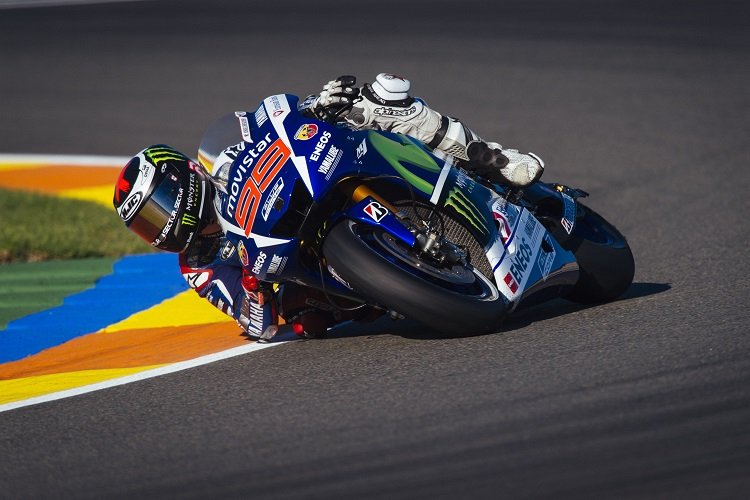 Jorge Lorenzo held off the Repsol Hondas of Marc Marquez and Dani Pedrosa to win the Valencia Grand Prix, crowning him the 2015 MotoGP World Champion. Valentino Rossi rode a heroic race from the back of the grid to finish fourth but Lorenzo was faultless, leading from start to finish to clinch a fifth world title across all classes.

Lorenzo made a typically blistering start to lead the Hondas through turn one but the other Movistar Yamaha had work to do, although one obstacle was removed when Cal Crutchlow’s bike was pushed off the dummy grid, sending him to the back of the field. Within a lap, Rossi had already climbed to fifteenth with three more riders dispensed with on the second lap but once he had reached the top ten on lap three, life would become tougher.

A crash for Andrea Iannone promoted him to ninth, but Rossi had to wait until lap six before overtaking Bradley Smith. Danilo Petrucci didn’t provide stern resistance to his idol, moving over on lap seven, but the Espargaro brothers defended bravely, although they were dispensed with by lap twelve. The next obstacle was Andrea Dovizioso and the Ducati held on until lap thirteen but by this stage, the leading trio were a dozen seconds ahead of Rossi was left to hope for assistance from Repsol Honda.

It looked unlikely with Jorge keeping his compatriots at arm’s length but the tension built in the closing stages as Pedrosa closed in having protected his tyres. On the penultimate lap, Dani was hot on the heels of his teammate and edged ahead on the back straight but an error at turn eight allowed Marc back through. The inter-team squabbling also gave Lorenzo some breathing space and after 30 laps of intense pressure, he crossed the line for his seventh win of 2015 and a memorable title triumph.