In 2015, the GP2 Series unsurprisingly provided its teams, drivers and fans alike with yet another spectacular show from the first race at Sakhir International Circuit, Bahrain to the final race under the bright lights of the Yas Marina Circuit, Abu Dhabi. Although dominance led Stoffel Vandoorne to the title with ART Grand Prix, every driver that competed this season proved their potential in the enchanting feeder series to Formula One.

Stoffel Vandoorne claimed the title at the ninth round of the season in Sochi, Russia. Credit: GP2 Series Media Service.

Vandoorne opened his campaign on the top step of the podium when he claimed victory at the season opener. The 23-year-old from Belgium stormed to victory in Saturday’s Feature Race ahead of Rio Haryanto and Alexander Rossi before claiming a second podium in Sunday’s Sprint Race. The moment the lights went out at the Sakhir International Circuit, Vandoorne made it clear to his rivals that he was here to win and would stop at nothing in order to be crowned GP2 Series Champion before the final round at the Yas Marina Circuit.

Of course, the rest of the grid would make the task of becoming champion as difficult as possible for their ART Grand Prix rival. The likes of Haryanto, Rossi, Alex Lynn, Sergey Sirotkin, Richie Stanaway and Mitch Evans all took victories themselves during the year.

At the second round at the Circuit de Catalunya, Vandoorne was quickest in both practice and qualifying before taking a second Feature Race victory and Sprint Race second. His name was settled at the top of the timing sheets, whether it was first, second or third position, he made sure his name stayed within the Top Three, already unsettling the nerves of some of his rivals.

Throughout 2015, Stoffel Vandoorne claimed a total of seven wins which led him to break the record for the most wins in GP2 when his final win in the Abu Dhabi Feature Race took him to a total of 11 victories during his incredible two years in the majorly completive series.

Racing Engineering driver Alexander Rossi finished his year in second position overall in the championship. In a year of outstanding performances by the American, Rossi found himself not only focusing on the GP2 Series but Formula One towards the end of the year when he was called into the Manor Marussia F1 Team car for a total of five Grand Prix, in place of Roberto Merhi. Despite the pressures of being given the opportunity to race at the top, Rossi kept focused and cool in order to claim victories in Belgium, Italy and Russia as well as four further podium finishes. With a grand total of 181.5 points at the end of the season, the 24-year-old finished 160 points behind Vandoorne and 42.5 ahead of Russia’s Sergey Sirotkin.

Sirotkin raced under the Rapax name in 2015 and established his name within the series with numerous outstanding performances. The Russian driver’s first GP2 Series win came in the Feature Race around the historic Silverstone Circuit, where he was able to keep his closest rivals Rossi and Vandoorne at bay in order to take the flag after the long 29 lap race. As well as taking victory for the first time, Sergey Sirotkin would be seen on the podium a further four times, making the most of what his Rapax team had to offer him during the season.

The season provided success for some but for other drivers, their year did not deliver the promise that they had hoped for, before the season got underway in April. A number of drivers fell victim to the misfortunes that can also arise during the season, whether it be an incident they couldn’t avoid or a small mistake, there was trouble.

As well as the ups, a lot of drivers fell victim to misfortune many times. Credit: GP2 Series Media Service.

After the 2014 season, the likes of Arthur Pic and Raffaele Marciello were expected to be strong contenders for this year’s title but the season didn’t run as smoothly as the Frenchman and Italian had hoped. Although they both seemingly had the potential and pace at the start of a race weekend, reliability and luck evidently wasn’t on their side as Pic and Marciello both found themselves struggling to maintain the gap between themselves and their rivals. What could have been a year of promise, became a year of unfortunate disappointment.

It was also an unusual year for Red Bull Junior and DAMS driver Pierre Gasly, whom has now gone two years without a single victory to his name. The Frenchman seemed to have plenty of spectacular opportunities but never managed to convert them into anything more than a few points. It appeared that whenever Gasly was set for great things, luck would not be on his side and he would suddenly lose confidence and the pace he would build up over the course of a race weekend. Abu Dhabi was a fine example when the DAMS driver was set for a victory but his tyres suddenly ‘hit the cliff’ and forced Gasly to drop drastically down the order.

When the GP2 Series returned to racing after the summer shutdown, Daniel de Jong was taken to hospital after falling victim to a horrific incident at the Belgian Grand Prix. At the historic and beautiful Circuit de Spa-Francorchamps, late breaking caused the Dutchman to lose control and end up in the barrier. A long red flag period allowed marshals to clear the wreckage and attend to the needs of de Jong who, as a result of the incident, was victim to fractured vertebrae and underwent a four hour long surgery later that evening. In a spectacular and quick recovery, de Jong was able to return to the series for the final two races of the season. 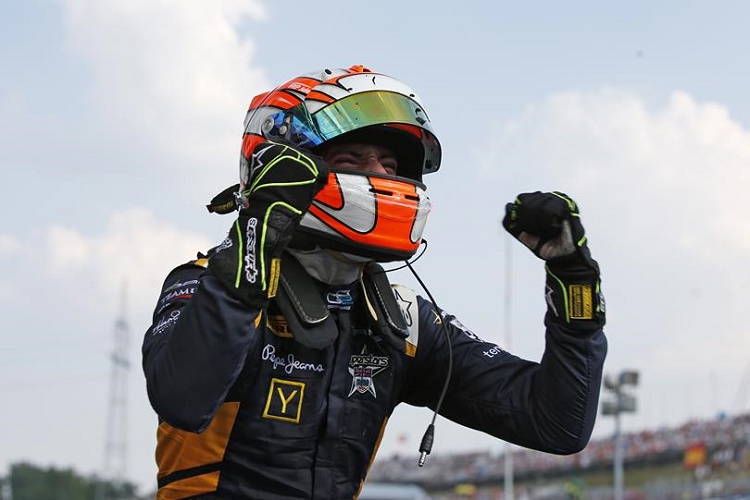 This season, more than ten drivers made their series debut but it was Alex Lynn who ended up being the best of the rookies in 2015. The 22-year-old DAMS driver from Great Britain ended the year sixth overall in the championship with 110 points and two wins to his name. As well as being the highest placed rookie, Lynn also finished ahead of his more experienced teammate, Pierre Gasly.

Also in his first season of GP2, Richie Stanaway impressed in the Status Grand Prix car. The tight streets of Monte Carlo played host to Stanaway’s first series win in an outstanding Sprint Race performance, and his second victory came at the Sochi Olympic Park in Russia.

Although the New Zealander didn’t finish the season due to other commitments, his impressive performance, even in the most difficult races, saw him come tenth in the championship standings.

RUSSIAN TIME drivers Mitch Evans and Artem Markelov also put in some exceptional performances this year. Evans took two victories in Italy and Bahrain whilst Markelov found himself on the podium for the first time at the Belgian Grand Prix after the Russian was able to keep a cool head in the Feature Race. Overall, both Evans and Markelov were able to turn around what began as a fairly dismal year, to a year of improvements and sensational performances ahead of their rivals. RUSSIAN TIME finished the year fifth in the standings and will hope that 2016 sees them continue to improve in all areas to get even better results.

Whilst one Campos Racing driver struggled this year, the other seemed to make waves around the world with his spectacular performances. Rio Haryanto looked set to take third in the championship but when the final race was cancelled after just one lap, he had to settle for fourth after taking five podiums, three wins and a total of 136 points throughout the season.

Overall, the 2015 season has provided fans with everything you would expect in racing. Credit: GP2 Series Media Service.

In summary, GP2 in 2015 once again showed the world exactly what racing was about in more ways than one, and that if 2016 is going to be anything like what we saw this year, the world will defiantly want to tune in for the action that this sensational series will have to offer us all.

By Tom Jackson
4 Mins read
The 2019 British F4 Championship was one of the most closely contested seasons yet, with a title fight that went down to the very last race.
General Formula 3Season Review