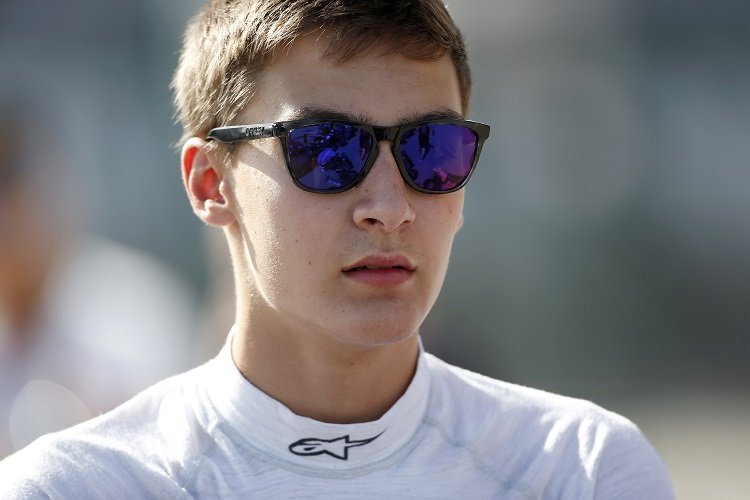 George Russell will return to the FIA European Formula 3 Championship in 2016, and is looking to challenge for the championship with Hitech Grand Prix.

The British driver admitted he has not completely relaxed, as he still talks to prospective future employees, despite having his 2016 ride in European Formula 3 sorted out relatively early in the off-season.

“Its been nice to have a bit of a rest [over the off season] because we were so busy, its been like a holiday just being at home really,” said Russell to The Checkered Flag at the Autosport International Show.

“It was nice [to get confirmed early], it was a weight off my shoulder. I’ve got a bit of other stress now just with other things lined up for the future, so I’m still not fully relaxed.”

Russell believes moving to Hitech Grand Prix is for the right reasons, feeling the new team could be the team to challenge the dominant Prema Powerteam squad, who have had a monopoly on winning the European Formula 3 championship since its reboot in 2012.

“Prema last year completely dominated the championship and no one could really compete with them,” said Russell. “When you’ve got a new team coming in, and I know they’re going to be doing it properly.

“We’ve got a tie-in with AOTech, Frederic Vasseur’s company, who’s now off to Renault F1, so I think we’re going to be the only team that can probably compete with Prema.

“From what I’ve seen so far they are doing everything right and they came straight into Formula 3 with [Alexander] Sims, and results were competitive.  We were in talks with them before the Hockenheim race when he did well; we saw the future there.

“It was a bit annoying really, it would have been nice for them to be undercover this year and I would have joined with them, and everyone would have been ‘why is he doing that?’ but as I said before, I’d been in talks for a while and saw good potential there.”

Looking back at 2015, Russell felt as though he should have one more than just the solitary race at Silverstone, seeing several other opportunities go begging for one reason or another, but he felt positive about claiming sixth in the championship with Carlin.

“2015 was okay to be honest, it started off really well; but we did have a lot of races where we did struggle to be fair,” said Russell. “I kind of understand the reasons why now, and I think next year should be a lot better but still to finish sixth in my first year was pretty good to be honest.

“To be disappointed with finishing sixth is good, and four drivers ahead of me are moving out, and I think we’ve got a good chance of winning it next year.

“We probably should have won at least three races; to qualify on the front row having never raced at the Norisring and make a little mistake and finish second, and then Nurburgring where I qualified second for two and third for another, all places I could have fought for a win but I got a ten-place grid penalty for all three races for an engine penalty.

“It just felt like when we had the opportunity to do the job or when we had the speed, we didn’t make the most of it.  Realistically we should have had another two victories there, but I think I’ve learned from everything; I’ll look back and it didn’t really worry me what happened last year and thought it as training for this year.”

Russell was disappointed not to race in the Macau Grand Prix in 2015 after being replaced in the weeks running up to the race by Carlin, feeling a misunderstanding between the two parties about his 2016 plans caused the break-up.

“The deal with Carlin was for Macau,” admitted Russell. “I still hadn’t done any deals with Hitech for 2016 at that point.  Obviously we some deals to do with testing, but it was a bit of miscommunication between us and Carlin.

“I think they just presumed that we already signed up for Hitech for 2016, which wasn’t the case, so I think they basically thought they might as well get a driver in who could potentially be one of theirs for 2016 than have me who won’t be there next year. At the time it wasn’t the case at all but it kind of sealed the deal for me to not go for Carlin for this year.”

Russell moved up from winning the BRDC Formula 4 championship in 2014 to race for Carlin in Formula 3 last year, and felt he acclimatised with the series pretty quickly, with his Silverstone victory proof of that. He felt comfortable working with the team, and believed he made the right call to move into Formula 3 rather than Formula Renault 2.0.

“[The jump up from F4] was fine really, I got into it fairly quickly, to win on my first weekend kind of proved that,” said Russell. “I had a good relationship with Carlin at the beginning which really helped, and I had a really good team-mate in [Antonio] Giovinazzi so I could learn a lot from him.  That really benefited me as a first year driver; I really thought I made the right step and I’m really happy we chose F3.

“The plan was maybe to go into Eurocup in 2015, I could have possibly won the championship or finished second and had a really competitive year but looking back on it, I had the DTM test at the end of last year, and that came off the back of Formula 3 as well, had I finished first or second in Eurocup I probably would have only jumped into Formula 3 this year.

“So I’ve basically not wasted a year, and I’ve got that rookie year out of the way; I’m older and more experienced and I’ll use it to my advantage.”

Joining him in Hitech GP for 2016 will be fellow Briton Ben Barnicoat, with Russell admitting the two did not always see eye to eye when they were progressing through the junior ranks, but hopes the two can push each other to strong results this season.

“Ben is definitely going to be fast, he’s always been fast,” insisted Russell. “I’ve grown up racing against Ben.

“It’ll be interesting being team-mates, we used to be big rivals and we weren’t exactly best of friends when we were juniors, but we had a couple of years not racing against each other and we became quite good mates then so it will be good team-mates.

“It’s really good for me to have a fast team-mate, and even though I’m going for the championship I’m sure he is too and we can help each other.”

At the end of 2015, Russell participated in a test session with the McLaren F1 Team as a reward for winning the McLaren Autosport BRDC Award in 2014, and he admitted the whole experience was ‘surreal’.

“[The McLaren test] was absolutely incredible really, it was so surreal, very bizarre,” said Russell. “On the day it didn’t really sink in what I was doing, I was just there, as a normal test day just doing my job as normal and jumping in the car.

“The first few laps were ‘wow, this is something else’ but I soon got into it and then, it was a couple of days after on the journey home, I was thinking ‘I’ve just tested for McLaren here in F1’.

“When you’re young you always dream of racing in F1, when you get older you realise its not quite as easy as ‘win and you’ll get there’ or quite as easy as [Max] Verstappen did, but to just get the opportunity to test was amazing.

“Just to get that insight on how F1 is something I love to do, and I’d love for it to be my normal job.”

By James Thomas
2 Mins read
Max Verstappen topped the timesheets of Free Practice Three ahead of Lewis Hamilton in the lead up to a thrilling Bahrain GP Qualifying at Sakhir.
Formula 1

By Paul Hensby
4 Mins read
Sebastian Vettel would be happy not to use Pirelli’s 2021 C3 Compound again after testing on it during free practice in Bahrain on Friday.
Formula 1

By Paul Hensby
2 Mins read
Guenther Steiner says an announcement will come within the next couple of weeks to who will race for Haas during the 2021 Formula 1 season.