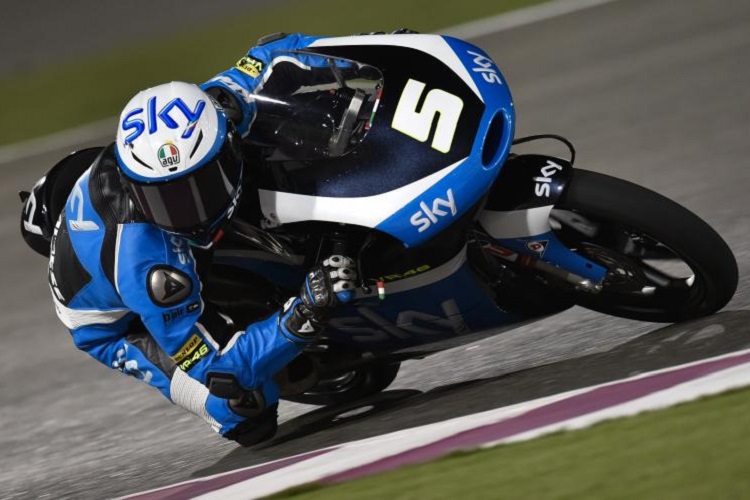 Romano Fenati denied Livio Loi his maiden Moto3 pole position with a sensational last gasp effort in qualifying at Losail. Loi had been the dominant rider in free practice and looked set for pole after taking top spot midway through the session but Fenati’s final lap of the evening triggered celebratory scenes in the Sky Racing VR46 camp.

Under the Losail floodlights, Fenati made the brightest start, becoming the first rider to break into the 2:06s bracket seven minutes in. The balance of power would soon shift from Sky VR46 to Leopard Racing with Fabio Quartararo and Joan Mir towing each other to first and second respectively but the French youngster found improvements tough going from that point onwards, sliding off the track twice in the space of a lap as he chased a quicker lap time.

Quartararo’s mood wasn’t helped by the sight of Loi snatching provisional pole, the Belgian clocking a 2:06.520 shortly after halfway and when the RW Racing rider improved by a further three tenths on his final run, pole appeared to be his.  That still seemed to be the case when the chequered flag flew but despite a deficit of two tenths heading into the final sector, Fenati hauled it back with a superb run through the final sequence of bends, seeing him pip Loi to pole by 0.047s.

Red Bull KTM Ajo teammates Brad Binder and Bo Bendsneyder worked expertly to slipstream themselves up the order, finishing third and eighth respectively, but three-place penalties for both will drop them down the grid after they were found guilty of riding too slowly on the racing line. Quartararo will be promoted onto the front row as a result while Estrella Galicia duo Jorge Navarro and Aron Canet will line up fourth and fifth, just ahead of Binder.

Niccolo Antonelli will start seventh despite a crash at turn thirteen with Enea Bastianini and Philipp Oettl alongside on row three while Bendsneyder’s penalty lifts fellow rookie Joan Mir into the top ten.