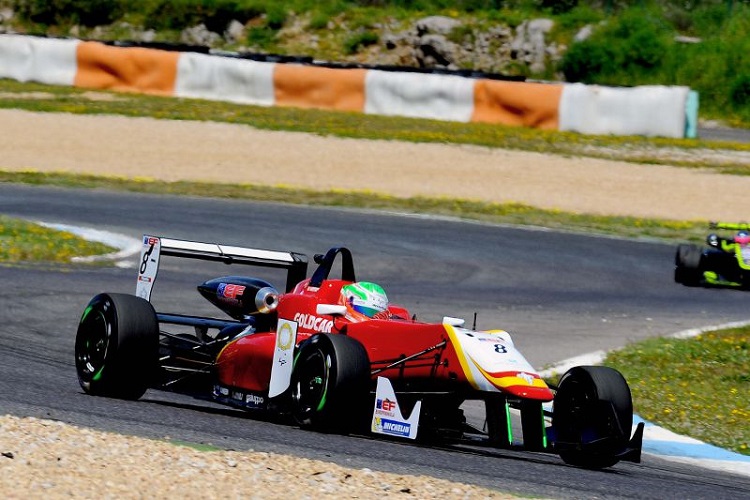 After storming to pole position earlier in the day, Leonardo Pulcini dominated the opening race of the EuroFormula Open season at Estoril, with the Campos Racing driver winning with relative ease by 3.662s.

Pulcini drove superbly away from pole, settling into a good rhythm and not putting a foot wrong throughout, with Ferdinand Habsburg his closest challenger for Drivex School, although the Austrian was not able to challenge the Italian for the victory despite making an outstanding start from fourth on the grid.

The first lap saw two of the top four from qualifying collide, with Colton Herta ending his race after heavy contact first with Jack Aitken and then with the wall. The Carlin driver was able to walk away unscathed, while Aitken took his RP Motorsport machine to the pits for repairs.

The clash allowed Diego Menchaca to take third for Campos Racing, completing a good day for the Spanish team, with the Mexican holding off the challenge of Damiano Fioravanti of RP Motorsport to the chequered flag.

Tanart Sathienthirakul claimed fifth in another of the RP Motorsports entries, ahead of Igor Walilko of Fortec Motorsports, who claimed points on the team’s debut in the championship.

Kusiri Kantadhee was seventh for RP ahead of Campos Racing’s Julio Moreno, while Carlin secured points on their own series debut in ninth with Keyvan Andres, ahead of DAV Racing’s Daniele Cazzaniga.

As well as Herta and Aitken’s collision on the opening lap, there was also a clash on the run down to the first corner between RP Motorsport’s Antoni Ptak and Teo Martin Motorsport’s Tatiana Calderon that ended both drivers races.