Will Palmer: “It’s quite a tough championship for rookies”

2015 BRDC Formula 4 champion Will Palmer will be looking to exert himself onto the Eurocup Formula Renault 2.0 Series this season having made the move full-time in the championship in 2016.

Palmer will race for R-ace GP in 2016, which is the new name of the ART Junior Team that gave the British driver his Eurocup debut at Silverstone last year, and secured two top ten finishes in the three races there.

The Briton revealed that he was not guaranteed to race in Eurocup this season, having had options in both European Formula 3 and the GP3 Series before opting for the Renault-backed 2.0-litre series.

“Eurocup wasn’t always the plan,” said Palmer to The Checkered Flag. “We did the round at Silverstone last year and one of the reasons for doing that was to get a taste of the Eurocup, to see what it was about. I thoroughly enjoyed that weekend, it went quite well for my first weekend in the series.

“After my season in BRDC F4 we had a few options, we had Eurocup but also European F3 and GP3, but in the end we decided after quite a tense few weeks of trying to decide what was best to do that Eurocup was the place to be for this year.”

Palmer revealed that working with ART back at Silverstone was part of the reason for his decision to race for the outfit in 2016, and also praised the engineering department of the French team over their eye to detail on set-up.

“Having worked with them at Silverstone, I decided they were a team that I felt had a lot of potential,” said Palmer. “As well as that, their form in post-season testing was very encouraging with Max Defourny, and I think their engineering strength is very strong as well.

“They are very meticulous and well prepared and I think because of that we will be able to have a very good season.”

When asked whether a title challenge was possible in his rookie season, Palmer admitted it was amongst his aims, but is just looking to do the best possible job at every race meeting in 2016.

“I think that’s got to be the target, but it’s quite a tough championship for rookies so really I’ve just got to do the best I can,” said Palmer.

“I can’t really sit here and say I need to finish top two or give any sort of real expectation of finishing position, but I’ll go to each round, do the best that I can and see where we are at the end of the year.” 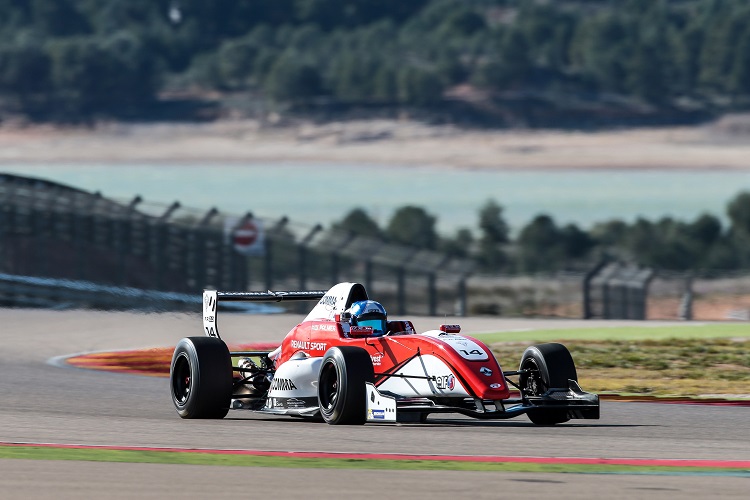 The British driver has a trip to Monaco to look forward to in 2016 after the Eurocup series added the legendary venue to its calendar for the first time in place of its former parent series Formula Renault 3.5, and Palmer is looking forward to experiencing the track in May.

“It’s an amazing thing on the Eurocup package this year to have a round in Monaco,” revealed Palmer. “Its something every racing driver would love to do, so to be racing at Monaco, Grand Prix weekend, its going to be an amazing event.”

Palmer looked fondly back at his 2015 season, that saw him claim not only that BRDC F4 championship with HHC Motorsport but also the McLaren Autosport BRDC Award, and revealed that he didn’t expect himself to win the F4 title so convincingly after twelve wins and ten pole positions in twenty-four races.

“It went way better than I ever could have expected,” revealed Palmer. “Going into the F4 season I thought I had a good chance of taking the title after winning the winter series the year before and having a strong run in the main championship as a rookie, but definitely didn’t expect to win in the way I did, which was incredible.

“To go on to win the McLaren Autosport award was absolutely unbelievable, and rounded off an amazing year.”

Palmer also revealed he has ambitions to follow his older brother Jolyon into Formula 1, and believes that if does a good enough job in junior formulae, he would be in with a chance to follow his brother into the top level of single seaters.

“It’s obviously really tough, but the fact he’s made it into Formula 1 makes me feel it is possible,” insisted Palmer of the Formula 1 dream.

“If you do a good enough job in the junior categories, you can breakthrough and that has got to be my aim now to try and join Jolyon in Formula 1.”

By Fergus Mckie
7 Mins read
Speaking exclusively to the Checkered Flag, Matt Parry recalls his career which included GP3 wins and 24 hour of Spa victory’s, and talks about his ventures into driver management with Peak Performance Management.
BTCCInterviews

By Samuel Gill
4 Mins read
Rick Parfitt Jr will head onto the BTCC grid for the first time in the 2021 season with EXCELR8 Trade Price Cars. The double British GT champion caught up with us to discuss the move, returning to racing and his legion of fans the ‘Parf Army’.
Formula Renault EurocupInterviews