EKS RX‘s Mattias Ekström stamped his authority on the 2016 FIA World Rallycross Championship with an emphatic victory, beating Petter Solberg in the final.

Solberg had been the fastest driver throughout the weekend and topped all of the qualifying races with the exception of Q4 where Andreas Bakkerud was quickest.

Semi final 1 saw Solberg blitz the opposition with the two Hansen brothers showing strong form, it was the elder Hansen, Timmy that finished second with Kevin in third having celebrated his eighteenth birthday yesterday. 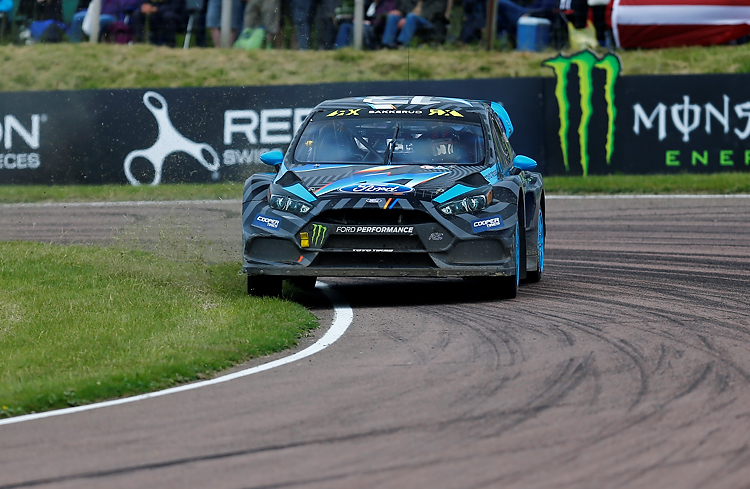 Bakkerud looked strong all weekend but was let down in the final with mechanical issues – Credit: RubberDuckDoes.com / Matt Bristow

Semi final two saw Ekström bide his time, he took an early joker so when Bakkerud and Timur Timerzyanov took their joker’s he managed to jump the two and take the win. There was a battle between Timerzyanov and Johan Kristoffersson which saw the two trading places throughout the race, unfortunately this was cut short when Kristoffersson spun as he headed towards the start line.

As the final started it was clear that Bakkerud was struggling as the Ford Focus RS RX was left on the line as Solberg pushed on in to the lead. Ekström opted for  the joker lap from the start again, a move that would later pay off, in doing so he also collected the Monster Energy Supercharge award. Solberg looked like he had the race wrapped up as he led the field around but as he took his joker on lap 4 Ekström powered through in to second place behind the Peugeot 208 WRX of Timmy Hansen; Hansen left it until the last lap to take his joker but lost out, dropping behind the championship leading pair, as Ekström took victory. Kevin Hansen secured fourth place ahead of Timerzyanov who slowed down on the hill and proceeded to battle for fifth with Bakkerud.

Talking after the race Ekström commented that it was likely down to his tyre strategy that let him take victory, in a strange twist, despite losing out to the Audi driver, Solberg didn’t lose any ground due to the performance he put in over the weekend, securing the qualifying victories.

No Luck for GRX Taneco in Catalunya