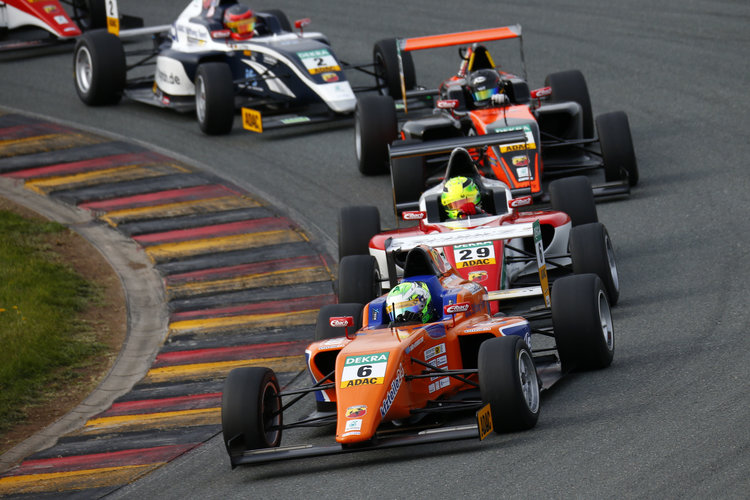 After a fairly quiet start to the race, Mike David Ortmann put a last lap move on Mick Schumacher to win the second race at Sachsenring, making it a double victory for the Mucke Motorsport driver in the ADAC Formula 4 championship.

Schumacher, who started on pole, kept the lead into turn one as Joey Mawson went around the outside of everyone to go second. The rest of the field funnelled in behind and Mawson desperately attacked Schumacher for the lead.

Mawson wasn’t going to give up easily and almost put the move around the outside of the Prema Powerteam driver. The two touched wheel as they went side by side along the pit straight. Mawson would have taken the lead, but a safety car put an end the battle with Kim-Luis Schramm beating Ortmann to the same corner and taking third place.

The safety car was called for Oliver Soderstrom who’d plowed into the barrier after tangling towards the back of the grid. The restart didn’t last long though as Job van Uitert threw away a points scoring position after spinning and ending up backwards in the gravel.

Shortly before the second restart, the race stewards announced that the leading duo of Schumacher and Mawson were under investigation as third place Schramm broke away with them. Behind fourth place Ortmann, a strong defensive from Kami Laliberte quickly saw a multi-car train form for fifth.

A fairly forceful, but clean move from Jannes Fittje saw him take the position with Nicklas Nielsen following him through later in the race.

Back at the front, Schramm, determined to get past Mawson, dove up the inside into the penultimate corner, forcing the Australian onto the dirty line and dropping him behind Ortmann to fourth. All of this allowed Schumacher to get away, with a 2 second gap to Schramm behind.

This could only last so long though, as Schramm’s incredible run came to an end. He put a wheel on the grass, spinning into the gravel and ending his race. It was a disaster for the US Racing driver, as he was forced to watch Schumacher and Mawson extend their championship advantage, with another safety car deployed.

The third restart was once again brief as Luca Engstler and later Mortiz Muller-Crepon broke their front axle seeing them pull off into the gravel. Determined not to let him go once again, Ortmann made the most of the final restart diving up the inside and taking the lead into the first corner.

Mawson made contact with the back of his rival but both continued as Ortmann was able to hang on to the lead, winning after Schumacher tried to dive bomb him into the final corner. Mawson took third as Fittje rounded out the breakaway top four.

Behind them Nielsen took fifth and thus the rookie win, with Laliberte’s impressive defensive campaign seeing him hold onto six ahead of Sophia Florsch and the second rookie, Juri Vips.

Palou prepared for dive into the deep end on IndyCar debut

Mick Schumacher: A Certainty For The Big Time?