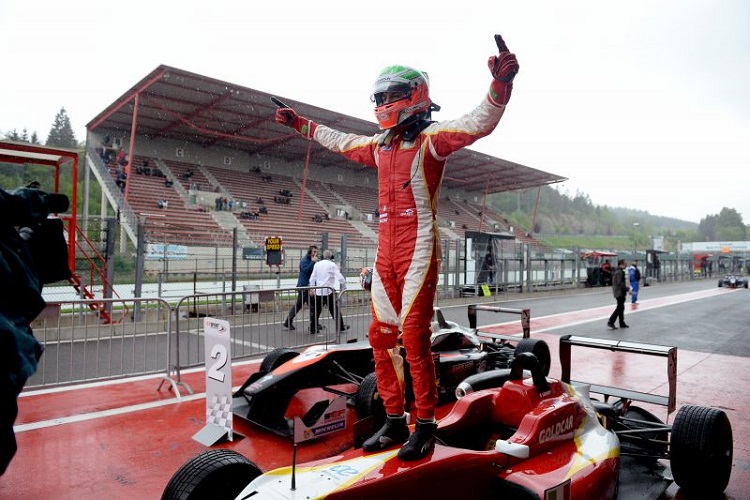 Leonardo Pulcini made the most of the tricky conditions at Spa-Francorchamps to claim his second EuroFormula Open victory of the season on Sunday and extend his lead in the championship.

The Campos Racing driver made a move on pole sitter Jack Aitken on the run down the Kemmel Straight on the opening lap around an initially damp Belgian circuit, which began to dry up before another rain shower around mid-distance made track conditions tricky.

Pulcini was able to build a gap to the following pack, with Aitken initially dropping down to third behind Ferdinand Habsburg before moving ahead of the Drivex School driver once more and giving chase to the race leader.

Aitken was never able to get close enough to challenge for the lead however, with the RP Motorsport driver was forced to settle for second, 1.383s behind Pulcini at the chequered flag.

Habsburg dropped back from the leading two as the rain began to fall harder, with the Austrian ending up 18.167s behind the race winner, but he was never under threat from behind, with Diego Menchaca ending the race fourth for Campos Racing ahead of Carlin’s Colton Herta.

Herta capitalised on a spin for Tanart Sathienthirakul, who was forced to settle for sixth, while Campos Racing’s Julio Moreno finished seventh, just ahead of Tatiana Calderon, who drove strongly in the mixed conditions to claim eighth for Teo Martin Motorsport.

Igor Walilko survived being launched by the kerbs at Raidillon to finish ninth for Fortec Motorsports, while Damiano Fioravanti claimed the final point in tenth despite the RP Motorsport’s driver spinning on track at the same point as team-mates Sathienthirakul and Kantadhee Kusiri.

Renault Will Only Stay in Formula 1 ‘For as Long as it...