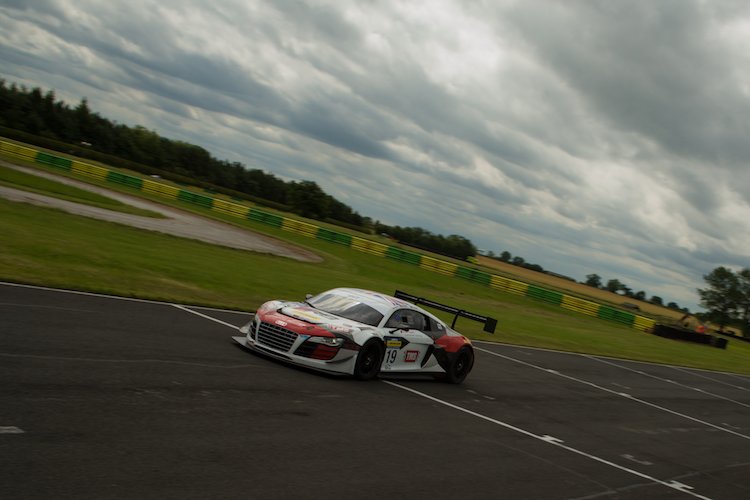 Phil Hanson and Nigel Moore claimed a superb pole position in the Audi R8 LMS for Tockwith Motorsports at the Dunlop Endurance Championship at Croft.

Hanson and Moore dominated qualifying finishing half a second clear of David Mason and Calum Lockie in the Ferrari 458 GT3.

The Tockwith Audi R8 LMS looked unstoppable throughout practice and showed the true speed in qualifying cruising to pole. Hanson will start on pole alongside Mason which could prove to be a close battle for victory.

Ian Lawson and Kevin Clarke finished a lonely third over two seconds behind the eventually pole sitter. Lawson and Clarke drove the BMW Z4 GT3 for ING Sport to an impressive lap time of a 1:23.482 but failed to disrupt the front two.

The Mosler MT900 driven by Manuel Cintrano and Javier Morcillo set the fourth fastest time half a second clear of closest rivals Chris Murphy and Jonny Cocker in the Aston Martin Vantage GT4 who showed great pace even though they are not in the same class as the Mosler.

Jacob Mathiassen and Steve Fresle completed the top five in the Ginetta G55 GT4 and with the qualifying beginning to spread out teams will look to consolidate their starting position in the race.

The Porsche 997 Cup and Synchro Motorsport Honda Civic Type R were separated by only one thousandth of a second albeit for eighth and ninth.

The BMW 1ME82 which looked unable to make qualifying after a torrid practice session managed to complete a solitary lap. Mike Moss and Tom Howard were 27 seconds of the pace but it looked positive ahead of what could be a difficult race for the Moss Motorsport team.