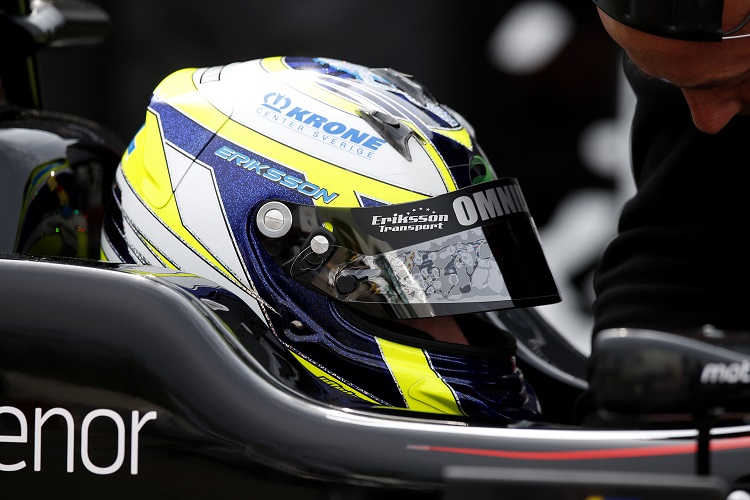 Joel Eriksson took the honours in the qualifying race at the Masters of F3 event at Zandvoort, and will start Sunday’s main race from pole position as a result.

The race was pretty much determined at the start, with pole sitter Callum Ilott slow away, which allowed Motopark driver Eriksson to assume the lead, a position he was never under threat from behind for the whole of the twelve lap encounter.

Ilott was able to retain second, but will be looking to make amends during Sunday’s twenty-five lap finale after being the dominant driver throughout practice and qualifying, with the Van Amersfoort Racing driver finishing 1.461 seconds adrift of Eriksson at the chequered flag.

Niko Kari was another driver to benefit at the start, moving up from fourth on the grid to run third, with the Red Bull-backed driver comfortably holding onto the position ahead of Hitech GP’s Alexander Albon and Motopark team-mate Sergio Sette Câmara.

Pedro Piquet led home Van Amersfoort Racing team-mate Anthoine Hubert in sixth and seventh, with Alessio Lorandi eighth for Carlin ahead of David Beckmann of Mücke Motorsport, while a slow start from Guanyu Zhou relegated the Motopark driver to tenth after starting fifth.

It was a disappointing day for the other two Carlin drivers, with both Colton Herta and Ameya Vaidyanathan retiring early with mechanical issues, while Sam MacLeod also retired from the race in Fortec Motorsports’ return to Formula 3.

By Paul Hensby
1 Mins read
Double R Racing were happy with the professional approach to the Masters of F3 event made by Thomas Randle after the Australian finished eleventh on Sunday.
Masters of Formula 3

By Paul Hensby
1 Mins read
Callum Ilott was forced to settle for fourth in the Masters of F3 event at Zandvoort, and felt the circuit is not one that promotes much overtaking in a Formula 3 car.
Masters of Formula 3

Sergio Sette Câmara: “I can't be happy with third”

By Paul Hensby
1 Mins read
Sergio Sette Câmara is looking for answers after feeling his performance at Zandvoort during the Masters of F3 event merited more than just a third place finish.