Lando Norris: “It was a near perfect weekend” 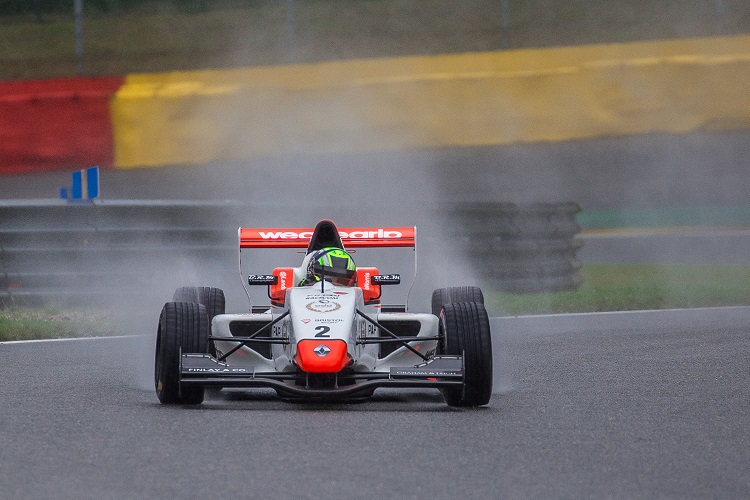 Lando Norris completed what he described as a ‘near perfect’ weekend at Spa-Francorchamps, taking two pole positions and two victories to take the lead in the Formula Renault 2.0 NEC standings.

The highly rated sixteen-year-old Briton took pole position for Friday’s opening race by an astonishing 1.949 seconds in a disrupted session, and then took victory by 8.155 seconds in a race heavily affected by wet weather, the first time the NEC drivers have experienced precipitation in race conditions during 2016.

The second qualifying session was also disrupted and held in the rain, with Norris again taking his Josef Kaufmann Racing machine to the top by 1.512 seconds, and although the Briton was made to work harder for his victory after another titanic battle with rival Max Defourny, he claimed the victory on Saturday by 0.722 seconds.

“It was a near perfect weekend,” reflected Norris. “I took pole with my only full lap in both qualifying sessions and drove really well to win both races.

“The first win was by eight seconds and pretty comfortable, I just had to make sure I didn’t make any mistakes. The second was really exciting and much closer, so it was great to come out with the points.

“It was a great weekend, we were really fast – the team did a good job. I did really well in qualifying to get my laps in; just one slight mistake in the second one would have seen me drop right down.

“And to take two wins in this manner has really helped push me right up there and turned it around for me. It’s great to go top at this stage, but there’s a long way to go.”