The 2016 Red Bull Global Rallycross season will be remembered for the titanic title battle between the Volkswagen Andretti Rallycross duo of Scott Speed and Tanner Foust.

The pair were the only two drivers in contention for the championship at the 2015 season finale, after a relatively slow start to the year, but this season their championship credentials were never in doubt – for every single day of 2016, a VARX driver topped the Red Bull GRC points.

The German-American factory operation weren’t the only big players in the 2016 field. Honda joined the fray in partnership with Olsbergs MSE, while after their debut campaign last year, Chip Ganassi Racing emerged as VARX’s closest challengers.

The first event of the year saw Red Bull GRC head to a new market in Phoenix, Arizona for a double header event.

VARX picked up pretty much where they left off with Tanner Foust dominating both races. Patrik Sandell made his early season intentions known with second place on the first day, ahead of Brian Deegan, while on day two, Speed returned to form with second, ahead of Sebastian Eriksson who took a podium for Honda in only their second Red Bull GRC event.

Although typically one of the most open championships in world motorsport, the opening race weekend provided a preview of VARX’s impending dominance.

Sandell however didn’t read that script, and took his third career win at round two in Dallas, Texas, ahead of fellow Ford man Steve Arpin. Foust and Speed reminded the rest that they were still a forced to be reckoned with by taking third and fourth.

Next up was Red Bull GRC’s third successive visit to Daytona. It was kind of fitting that an ex-NASCAR driver and current NASCAR team triumphed at ‘The World Center of Racing’, with Arpin leading home Ganassi team mate Deegan for his and Ganassi’s first win and one-two in the series. Eriksson took his second podium finish in four events to carry on Honda’s impressive start to their rallycross foray, a year on from his first win in the series.

He continued his fine form on day two with another third, but normal service at the front was resumed, with Foust leading home Speed for another VARX one-two – a result which came only a day after Speed’s car was left engulfed in flames.

What followed was The Base, and one of the most exciting finals in Red Bull GRC history. However, it didn’t look like it was going to be that at first.

Foust launched off into an early lead in the wet and muddy conditions and was in track for his third win in six events. At the halfway point in the race, Foust, with a 13-second lead, pulled off the track, and retired from the race with mechanical problems.

That handed the lead to Brian Deegan who was aching to take his first win since 2011. Speed, meanwhile, had made his way through the field from the back and was in second place but under pressure from Arpin as the race entered its closing stages.

There was one last twist to come…

Deegan kept his joker back until the last lap, a decision that proved costly as reigning champion Speed got by on the final corner on the final lap to take his first win of the season at the Independence Day weekend showcase.

That was set to be a double header event but lightning before the second final of the weekend caused the event to be scrapped and no points rewarded for the Sunday.

After Foust won three of the first five races, Speed’s Base win would see him begin an impressive run.

He beat Patrik Sandell and Foust to the win in Washington DC, while bad luck again struck Foust wile leading in Atlantic City. He sustained a puncture while out in front, allowing Speed to take a third successive win and the championship lead for the first time in the season.

Foust hit back in Seattle a few weeks later. Racing at Evergreen Speedway, a venue the two-time champion knew well from his Formula Drift days, Foust headed home Eriksson and Joni Wiman as Honda took their first double-podium of the year. That gave the championship lead back to Foust but Speed was still right up there with him after finishing fourth.

Despite Arpin and Deegan still mathematically being in championship contention, the championship showdown at the season-ending Los Angeles double header was very much an all-VARX affair – especially after the first race which saw Speed head home Foust and Arpin.

The final race of the year was a thriller.

Sandell hurled into an early lead, passing Speed round the outside who tucked in behind in second, while Tanner Foust, fighting from further back made his way to third.

Foust kept close to Speed, but it was his ex-F1 team mate who would make the first move, getting by Sandell for the lead. It was looking like a dream finish for Speed, a win in the final race to claim the title, until Deegan, who had been quietly closing in on the leaders, avenged his Base defeat by timing his joker to perfection to get by Speed and take his second career win.

Speed’s strong final weekend saw him once again jump Foust in the standings to take a second consecutive title, while Deegan’s win saw him move up to third, ahead of Arpin in the intra-team battle for best-of-the-rest behind the two Beetles.

As is becoming all too familiar to Sandell, bad luck robbed him of a promising title tilt. Three successive races off the podium in the mid-season and a missed final in Seattle saw him settle for fifth.

Despite only taking one podium finish to his team mate’s four, Wiman made the most of his 2014 title-winning consistency to beat Eriksson to sixth, while for the second year in a row, although this time driving for his own team, Austin Dyne was placed last out of the full season drivers.

It was a difficult year for Dyne, who spent much of 2015 as a title contender – a fifth place finish at The Base the high point of his year.

Rhys Millen made a welcome return to the championship, driving the race-winning, but ageing, Hyundai Veloster in the opening five rounds of the season. His best result was a sixth at Daytona, the site of his first win in 2014. Despite missing more than half the season, he was still classified in the top 10.

Other drivers to make appearances in the 2016 season included Nelson Piquet Jr. and Tanner Whitten, who both stepped in for SH Racing following Jeff Ward’s early exit from the championship; Sebastián Saavedra, who made a pair of unsuccessful cameo appearances early in the year, and Kevin Eriksson and Mitchell De Jong, who both ran a third Olsbergs Honda entry and various points in the second half of the year.

Subaru also featured in the 2016 season. In a year billed as a development year by the Vermont Sports Car-run team, the Japanese marque fielded two different types of car, and five drivers – Sverre Isachsen, Bucky Lasek, Chris Atkinson, David Higgins, and Toshi Arai – throughout the year. Sixth places for Atkinson (Seattle) and Higgins (LA I) were their best results of the year, although their focus very much remains on 2017.

Speed’s championship win sees him become just the second multiple Red Bull GRC champion in the series’ history after team mate Foust, who triumphed in 2011 and 2012. He also now one win behind Foust’s all-time series record of 12 wins, impressive hauls that both drivers will no doubt add to in 2017.

The 2016 Red Bull GRC Lites season was by far the most competitive in the category’s history.

Six drivers won out of 11 races in a season that saw three drivers enter the season finale in championship contention.

Of those three, two were racing for se 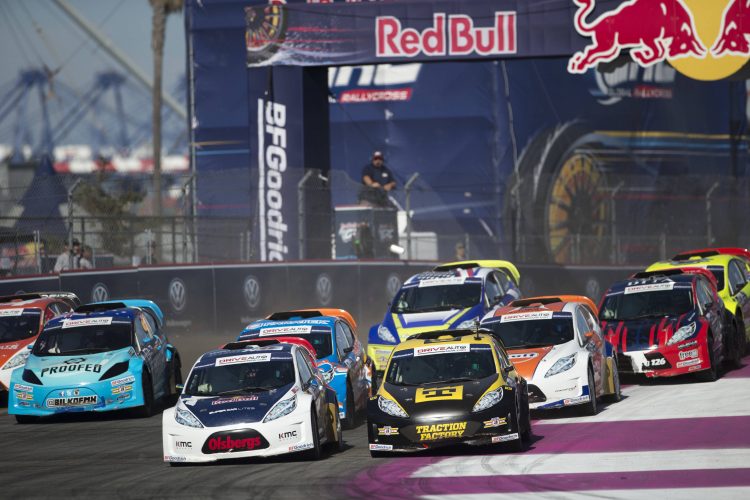 ries powerhouse Olsbergs MSE who have so far been unbeaten in Red Bull GRC Lites.

Oliver Eriksson was looking to make history as the first driver to retain the Lites title. Until 2016, Lites champions Joni Wiman, Mitchell De Jong, hadn’t returned to the spec series, instead moving up to the Supercars class.

While Eriksson’s title defence was no doubt impressive, with two wins and three second places, it was his team mate Miki Weckstrom who had arguably the more impressive season.

The Finn had never raced in rallycross before this season, something that didn’t hinder him as he won his first ever race. Another win and five more podiums established him as a force to be reckoned with in Red Bull GRC Lites.

He too found himself in victory lane twice, the second time being in the season finale as both Olsbergs drivers missed out on the podium, giving Bigham his and Dreyer & Reinbold’s first GRC Lites crown.