Miami Gears Up for America’s Maiden Race of Champions

After failing to arrange a date for the end of the 2016 season, the Race of Champions returns to start the year off in spectacular style. The event, held at Marlin’s Park Baseball Stadium, will be the first to take place in North America.

Since announcing Sebastian Vettel and Ryan Hunter-Reay back in August, ROC has grown to once again become the largest field in the competition’s history.

The individual Race of Champions will take place on Saturday 21 January as sixteen drivers are split into four equally sized groups, with the ROC Nation’s Cup happening on the following day. In a change to history though, the Nation’s Cup will also have a group stage due to there being an irregular number of teams.

The top two from Group A will progress to the first Semi-Final, while the winners of Group B and C will pair up, ensuring that at least one North American team reaches the final. This concept of “America vs Rest of the World” carries over into evening with a three round competition between two groups.

The different ROC Nation Cup groups are listed below. 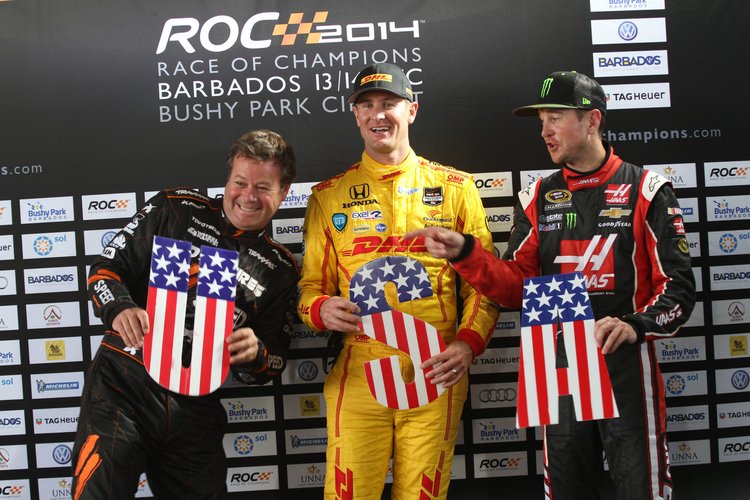 This years Race of Champions will be a nationalistic affair with the Nations Cup turning into an “America vs Rest of the World” Competition.

In previous years, it’s been common for the home nation to provide more than a single team to the Nations cup with London creating an England 1, England 2 and Team Scotland, though this will be the first year that 3 teams are solely represented by one flag.

In order to distinguish their entrants, the United States has created three pairs, the first being named Team USA IndyCar. The outfit comprises of Hunter-Reay and 2016 Indy 500 winner; Alexander Rossi. The latter will only compete in the full ROC if he beats Scott Speed in a pre-group knockout.

Speed himself will partner veteran Travis Pastrana who last made an event appearance in 2011. These two make up Team USA Rally X with the final pair of Kyle and Kurt Busch making up Team USA NASCAR.

The final of the four teams to make up Group A will be their northern rival Team Canada. 30-year-old James Hinchcliffe, one of seven IndyCar racers leads the way alongside ROC Factor competition winner Stefan Rzadzinski. The unknown driver was one of two entrants to win a Facebook poll to compete in the competition. He’s a regular in the Canadian Nissan Micra Cup.

Otherwise dubbed as the European group, last years winner Vettel, returns to defend his title. The four-time Formula One champion has only one Champion-of-champions title to his name, but has previously lifted the Team Germany Trophy six times making him the most successful competitor in the series history.

Joining him as a last-minute entry, will be 2014 runner-up Pascal Wehrlein. Elsewhere, the ever successful Team Nordic pairing of Tom Kristensen and former World RallyCross Champion, Petter Solberg return for another crack at the trophy.

Rounding out the European Group will be the Great Britain team of David Coulthard and Jenson Button. Despite being long since retired, the Scot has become a regular in the competition, even winning in 2014. As for Button, this could likely be his last competitive appearance providing he does not take up the option to return to F1 in 2018.

Sebastian Vettel celebrates his win in the last Race of Champions by doing donuts in the KTM X-Bow. He’ll once again return to defend his crown and compete for Team Germany.

They won’t be the only Brazilian’s there though, with Helio Castroneves and the second ROC Factor winner Gabriel Glusman creating Team Latin America. Glusman comes into the competition as a fresh face having only tested cars during Track Days at Donington and Spa, prior to this.

Meanwhile, making their ROC debut will be Double-Crown winner Juan Pablo Montoya and fellow IndyCar compatriot, Gabby Chaves. The 23-year-old, like the ROC Factor winners, will sit out Saturday’s Race of Champions, only participating in the Nation’s Cup the following day.

The Checkered Flag will bring you continued updates of the event throughout the weekend.