The rise of Lando Norris

When I first watched Norris racing in the Ginetta Juniors in 2014, it was clear that this kid had talent. His karting record and the way he adapted to car-racing made that very clear. But the speed at which he is rising up the single-seater ladder is utterly remarkable. Few single-seater talents will ever have a season as special as Norris’ 2016. To win three high-profile single-seater championships in one year is sensational, especially with two of those coming in the hugely competitive world of European Formula Renault 2.0.

Not content with just that though, the 2015 MSA Formula champion also won races in British F3 and impressed on his first run at Macau, before being deservedly crowned the latest winner of the McLaren Autosport BRDC Award. With four titles under his belt at just seventeen years of age and a maiden F1 test opportunity next year, the future looks incredibly bright for Norris and it’s going to exciting to see what success he can achieve in 2017. – Simon Paice

Next year there will be a raft of changes taking place through sportscar racing, most notably with the onset of the new LMP2 prototype regulations. After drawing understandable scepticism when it was revealed last year, the new spec-chassis rulebook is now showing that cost-cutting can still provide plenty of customer interest and high quality competition. Four cars will be available to teams next year: the ORECA 07, the Ligier JSP217, the Riley-Multimatic Mk. 30, and the as-yet-unnamed model built by Dallara.

It’s also worth keeping an eye on what’s happening Stateside, where the LMP2 regs are loosened to accommodate the demands of the American market. The resulting formula is Daytona Prototype International, or DPi, which uses the same four chassis constructors as LMP2 but allows for different manufacturers from big companies such as Cadillac, Nissan and Mazda to supply engines and bodywork packages.

LMP2 is also rapidly becoming one of the most competitive arenas for competition based on the influx of bright young talents – some of them from single seaters – hoping to get a paid seat in a top prototype team. Rising stars such as Pipo Derani, Gustavo Menezes, Antonio Giovinazzi, Sean Gelael and Lewis Williamson have all shown their hand on the world stage in 2016, so expect more raw talent to come flooding through the gates next season when LMP2 takes on its revised, more powerful formula. – Daniel Lloyd

A continued surge in the GT4 class

2016’s British GT Championship marked something of a tipping point in terms of the balance between GT3 and GT4 entries. Normally the lower, less entered class, GT4 in 2016 saw the majority of entries and a higher level of competition than many had seen in years. From the very start of the season the class has been on the up with McLaren announcing the gorgeous 570S GT4 would be available to customers in 2017 – with one already going to Tolman Motorsport and more in the offing – and the ongoing success of the Ginetta G55 GT4 and the Aston Martin Vantage GT4, has seen the momentum tip towards the secondary class.

With the increased expense of the GT3 class, and many preferring to spend that money in championships like the Blancpain GT Series or International GT Open, it wouldn’t be outside the realms of possibility to see GT3 as the minority class. Although, based on the racing the category has seen in British GT this year – with Ross Gunn’s mega charges up the field, Ciaran Haggerty and Sandy Mitchell pushing the McLaren 570S GT4 to its absolute limit and Abbie Eaton & Marcus Hoggarth hustling a heavy Maserati around Oulton Park – a GT4 heavy class wouldn’t exactly be a bad thing. – Joe Hudson

The battle for the 2016 season’s British Superbike Championship saw two world-class riders fight it out in Shane Byrne and Leon Haslam. The quality has never been higher in our domestic Superbike series but with the names joining the grid for 2017, BSB will have a roster that can justifiably be called world-class in its own right. Byrne and Haslam remain while James Ellison and Michael Laverty, two riders who have held their own in MotoGP, will lead the new McAMS Yamaha team.

Joining them will be the wildcard of World Superbikes, Davide Giugliano, who joins Tyco BMW while the new Suzuki GSX-R1000 will be in the hands of 2014 World Superbike Champion Sylvain Guintoli. Throw in future stars like Luke Mossey and Glenn Irwin and BSB has never looked stronger.  – Louis Suddaby

There is nothing better than seeing a young driver progressing through the ranks and showing almost unnatural talent behind the wheel. Monegasque driver Leclerc has all the makings of a Formula 1 driver, and followed up a race winning campaign in Formula 3 in 2015 with a great 2016 in GP3 with ART Grand Prix that culminated in three race wins and the championship.

Add to the mix his links with the Ferrari Driver Academy, and his four free practice outings with the Haas F1 Team in 2016, and Leclerc’s year was special. He may not have been ready for a race seat in 2017 in Formula 1, but do not be surprised if he is there sooner rather than later, especially as he links up with 2016 GP2 Champions Prema Racing alongside fellow FDA member Antonio Fuoco. – Paul Hensby

The rise of the large manufacturers in Formula E

With BMW, Audi and Citroen ramping up their involvement, and Jaguar having just entered their own team, it won’t be long before we start to see a host of major car companies join Renault at the top of the championship.

This should see a real jump in performance terms with more powerful and long lasting powertrains, which could make Mercedes’ job even harder should they take up their option to enter in season five. However it will pose a real challenge for the series as to how they’ll keep costs under control. With so many resources available to them it will be hard to stop these manufacturing behemoth’s from crushing the smaller teams. – Scott Douglas

After two seasons of epic racing an action across the world, 2017 will see the third season of action for this growing Touring Car series. As more and more national series convert to the TCR regs expect an even higher level of action, suspense and door to door racing in this epic tintop series – Phil Kinch

It’s new cars all round in the FIA WRC. Hyundai have been building up for a few years now and were troubling Volkswagen in 2016. Citroen have been working hard on their new C3 WRC, M-Sport are never to be ruled out, especially now they have the services of Sebastien Ogier and there is talk of the 2017 Polo coming as a privateer run car later in the year. Add to that the return of Toyota to the WRC mix and all bets will be off. – Nick Smith

The Porsche Carrera Cup GB has been enjoying a renaissance for the past two seasons, with grids packed both in terms of talent and numbers. Already 2017 is shaping up to be an even more impressive year. The addition of JTR to the grid means yet another top-quality team will be fighting at the front of the field, whilst the confirmation that Tom Wrigley will join In2Racing means that Nick Dudfield’s operation will also be a more prominent feature of the series next year.

The return to Le Mans (and Donington Park) arguably creates the championship’s most complete calendar ever. Then there is the intrigue of Dan Cammish. A historic third title beckons you may argue, but just how many victories can he add to his tally across a duel GB/Supercup campaign? Only time will tell… – Lee Bonham

The Effects of FIA’s Road to F1

Last year in my “What my Watch” segment, I made a brief comment on the FIA’s “involvement” in the junior categories. 2016 marked the year in which almost all national Formula 4 series were fully set up (Denmark will debut next year) and also the return of an FIA-Approved British F3. Yet, after killing off national F3’s due to a rise in cost, the category seems to regaining strength.

At the start of the year Carlin left European F3 to instead enter EuroFormula. Elsewhere, Formula Renault continues to yield strong grids, while Formula 2 is still “coming soon”. Despite all this, Lance Stroll has become the first driver to reach F1 after starting in Formula 4. Only time will tell and 2017 could be a make-or-break year for the FIA’s planned monopoly. – Connor Jackson

Young Max has been the shining light of the 2016 Formula One season, especially since he made the switch to Red Bull. Verstappen has been the most entertaining driver on the grid and has the fan base to prove it. He already has one win to his name and isn’t afraid to go wheel to wheel with anyone – just ask Sebastian Vettel. All of this, in a Red Bull car that isn’t perfect. If they get it right next year I expect him to challenge for the title.  Besides, Mercedes’ domination of the sport has to end sooner or later right? – Josh Close 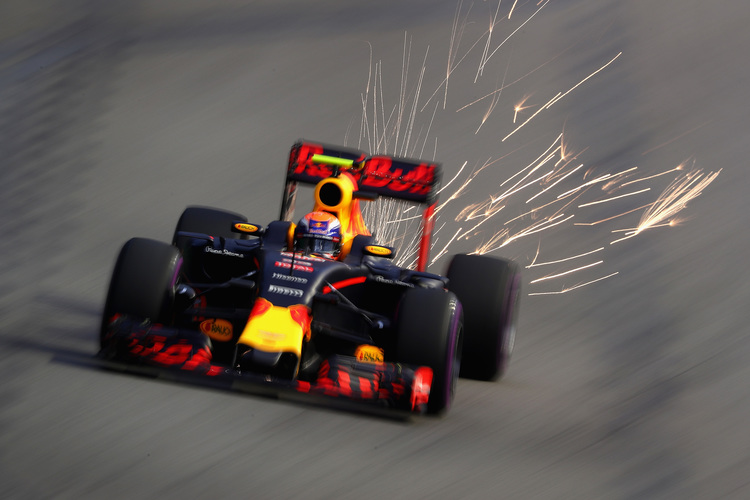 I personally believe that the Red Bull Racing team will be the ones to watch in 2017. They have already shown their potential this year, not only in their race wins but also on weekends such as Monaco, where they arguably had the strongest car. They also have the line-up with the most potential and natural talent, and so it will be interesting to see how they cope with the regulation changes. – Megan Cantle

A fresh opportunity for F1?

New owners, new regulations and new exciting talents such as Stoffel Vandoorne interloping the fray could combine to make the sport more unpredictable in 2017 and beyond, potentially threatening the dominance of Mercedes. While several regulations will invoke nostalgia of the mid ‘70s, it offers hope that fans could witness a tighter field next season or even a change in the guard.

Also, where will we see Jenson Button in 2017? Fans will be on tenterhooks at the prospect of being closer to one of the UK’s modern day racing superstars, while his replacement Vandoorne will provide McLaren team-mate Fernando Alonso with a tough marker. – Dan Mason

The many rule changes set to take place in 2017 should hopefully spice things up a bit and could relinquish the strong hold the Mercedes AMG Petronas Formula One Team currently have over the championship, with aerodynamucs coming back into play over engine power. Also keep an eye on Stoffel Vandoorne and Esteban Ocon, both talented drivers with a real chance to shine next year. – Rachel Hack

With another shake up of the F1 regulations coming in 2017, the question is whether it will revolutionise the racing and produce more overtaking but also whether it could put an end to the Mercedes domination that has been firmly in place since the start of the V6 era back in 2014.

Every team will head into the new season with question marks over where their performance will be. With the cars having a radical overhaul aerodynamically and becoming more challenging to drive it is – hopefully – all to play for. – Chloe Hewitt

"The timing of the safety car was unfortunate" - Williams' Dave Robson

"In the right place at the right time" - George Russell

By Nick Golding
2 Mins read
George Russell secured another points finish at the Italian Grand Prix after capitalising on safety car for Lewis Hamilton and Max Verstappen’s crash to finish ninth. Nicholas Latifi just missed out on the points in eleventh.
Formula 1

By Nick Golding
1 Mins read
Alpine Team Principal Marcin Budkowski is glad both Alonso and Ocon got through the Italian Grand Prix unscathed as the team record double points finish at Monza.